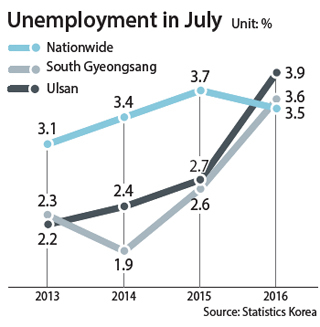 The restructuring of the shipping and shipbuilding industries is taking its toll on jobs.

Although the nationwide unemployment rate dropped 0.2 percentage points to 3.5 percent in July compared to the previous year, the rate in South Gyeongsang, home to major shipyards, rose 1 percentage point to 3.6 percent.

The unemployment rate for the southern shipbuilding port city of Ulsan, in particular, rose 1.2 percentage points to hit 3.9 percent last month. That was the highest growth rate in the nation last month, according to Statistics Korea Wednesday.

July was the third consecutive month in which the unemployment rate in South Gyeongsang and Ulsan grew by more than 1 percentage point year-on-year.

“We can’t say for sure that the rate in South Gyeongsang and Ulsan is rising due to the restructuring, but we can say it may have affected the rate since the number of workers in manufacturing fell significantly,” said Sim Won-bo, a director at Statistics Korea.

Data showed that the number of people who found new jobs in manufacturing in July dropped 65,000, or by 1.4 percent, compared to the previous year. That was the biggest decline since June 2012, when the number fell 51,000 year-on-year.

“Fewer people are finding jobs in manufacturing industries due to poor exports and the ongoing corporate restructuring,” said Kim Ie-han, a director at the Ministry of Strategy and Finance. “However, the overall unemployment rate has improved as the services sector hired more people compared to the previous year. And we believe the rate in services rose significantly due to the base effect from the Middle East Respiratory syndrome [MERS] outbreak that hit Korea last summer.”

“There are many uncertainties that might affect the economy negatively in the second half of this year such as the expiration of individual tax cuts on vehicles and a slow manufacturing sector due to the restructuring,” said Kim at the Finance Ministry. “We need to execute the supplementary budget and other fiscal policies as soon as possible in order to minimize the negative impacts.”

Meanwhile, the unemployment rate for job seekers aged 15 to 29 was 9.2 percent, down 0.2 percentage points from both the previous year and previous month. The rate surpassed the 10 percent level earlier this year but declined for two consecutive months.

“The youth unemployment rate tends to go up in winter and decline starting in the spring,” said Sim at the statistics agency.

In fact, the number of young people getting job offers continued to rise for the 35th month in a row, according to the Finance Ministry.

The overall employment rate rose 0.1 percentage point from the previous year to 61.2 percent in July. The rate for men remained unchanged at 71.8 percent, while the figure for women rose 0.2 percentage points to 51 percent.