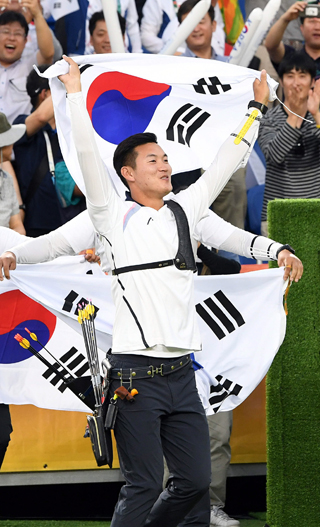 When was the time you felt the “national power” of Korea? It may be different for everyone, but personally, my moment came during my business trip to the Arctic. The memory of the summer of 2012 is still vivid. I went to the town Ny-Ålesund on the island of Spitsbergen in Norway. It is 79 degrees north, and Dasan Station is located in the town.

Not everyone can build a station there. The Korean station is proudly operating with 11 advanced countries such as Germany, France and China. Science and technology are the prerequisites. Comprehensive national power including economic and diplomatic powers as well as national prestige is required. And the pride I felt at the Arctic still resonates in my heart.

As the sultry summer makes me miss the cold wind of the Artic, Korea’s situation in the controversy surrounding the Terminal High Altitude Area Defense (Thaad) deployment fuels the feeling of helplessness. Korea is flustered to resolve the complicated equation involving the North’s missile program, the U.S. Forces Korea’s defense, concerns for China’s retaliation and protest of the chosen site.

The emission-rigging scandal of Volkswagen and Audi is also serious. The German company, the second-largest automaker in the world, appears to think the Korean market is a pawn. After the scandal emerged in the United States, it promised nearly 17 trillion won ($15.5 billion) of compensation. It didn’t even offer a proper apology here, claiming that the laws are different in Korea and the United States. It doesn’t appear to think seriously about the Korean government’s administrative power.

In time with the 70th anniversary last year of Korea’s liberation from Japan’s colonial rule, the government highly promoted the accomplishments and heightened national power over the seven decades. But it feels embarrassing to see the repeated predicaments.
What will be Korea’s positioning? The Chinese Academy of Social Sciences rated Korea’s national power ninth on the global list in the mid-2000s. The Hansun Foundation of Freedom and Happiness also ranked Korea ninth among the Group of 20 countries in its 2014 report. The think tank pointed out that though Korea has strong hard power such as defense capabilities and science and technology, it needs to improve soft power such as politics, social capital and diplomacy.

There are many more things we have to improve. The Blue House and the administration’s poor management abilities, the National Assembly’s legislative capacity that often causes public mistrust, and our diplomatic capability, ranked in the middle of G-20 member countries, are all big challenges, but we seemed to be trapped in a maze.

The Newsroom, an American TV drama, sent us an important message. The show’s hero, anchor Will McAvoy, said America is not the greatest country in the world anymore. “The first step in solving any problem is recognizing there is one,” he said. Perhaps, we are losing the ability to recognize there is a problem.


*The author is a deputy editor for national news team 2 at JTBC.