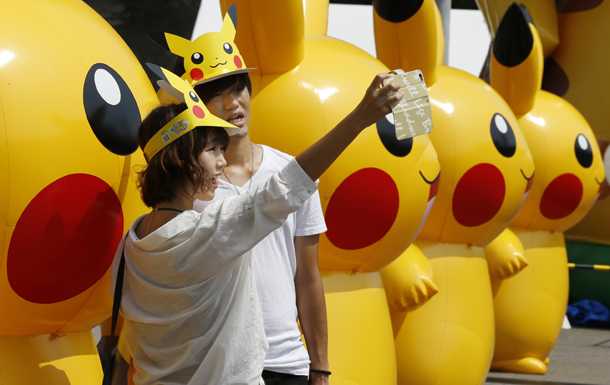 A couple takes a selfie in front of giant displays of the Pokemon character Pikachu at the Minato Mirai shopping district in Yokohama, Japan, on Wednesday. [AP/NEWSIS]

Mapbox, the provider of maps for customers including Evernote and The Washington Post, felt Pokemon Go’s impact the very day the monster-hunting game launched in the United States last month.

Inquiries from game developers poured in even though Mapbox wasn’t behind the smash hit. One asked for a dark theme for night-time fighting, another for a pirate map with locations marked in old-school cursive script, Chief Executive Officer Eric Gundersen said in an interview. A publisher wanted to know all the city parks large enough to house a crashed alien spaceship.

“The spike for us was overnight, an entirely new demographic of map users,” Gundersen said. “What a crazy month we had since the launch of Pokemon. I’ve talked to more than a dozen major gaming outlets in the past few weeks.”

The runaway popularity of the app where users roam real world places in search of virtual pocket monsters has focused developers on the potential of enriching game content with on-location data. Executives at Electronic Arts and Ubisoft Entertainment SA have expressed their admiration for Pokemon Go and said they are working on their own titles that include elements of augmented reality, or AR.

“There is going to be a flood of augmented reality games going forward,” said Serkan Toto, founder of consultant Kantan Games. “There were other AR games before, but until now no one in the industry paid any attention.”

They are now. Game developers are looking for custom maps that not only fit the specific aesthetic of their game, but also become part of the brand, Gundersen said.

Mapbox offers a free web-based software editor, described by Gundersen as Photoshop for maps, that lets users change color schemes with just a few clicks. It also offers minute control of how roads, bridges, parks and other features appear. That allows Le Monde to deliver maps in French and the Financial Times in its signature pink.

The start-up, which is based in San Francisco and Washington, D.C., is now looking to bring that flexibility to games. Mapbox is working on a plugin for Unity, software used in about 30 percent of the top 1,000 grossing mobile titles.

“This is not about designing a game level anymore, it’s about having a full representation of the world baked into your game,” Gundersen said. “That’s an entirely new concept.”

The technology behind Pokemon Go comes from Niantic, whose founder John Hanke helped lay the groundwork for Google Earth. In 2012, Niantic created Ingress, in which opposing teams capture “portals” based on real-world landmarks. The company grew its database by allowing players to submit popular locations. These portals were later reborn as Pokemon hot spots.

That level of real-world granularity is what elevates the game above simple maps and navigation, making it particularly compelling, Toto said. And when the context doesn’t fit, like when a water Pokemon spawns nowhere near a body of liquid, the illusion is just as easily broken, he said.

Likewise, Mapbox offers more than just “pretty maps,” Gundersen said. The company is constantly refining and updating its maps by tapping into the anonymous data streams of its customers. Every time someone creates a memo in Evernote or pins a restaurant on Pinterest, a Mapbox server is pinged. Combined, that data can provide important context for game companies. That can amount to more than 100 million miles of data in just a day.

“The same tools we used to identify a traffic jam, now allow us to say these are the best hours in this park when there are people,” he said. “We have the raw metadata, we know where people are walking and when.”

Gundersen founded Mapbox in 2008 as a data visualization contractor in Washington. The company worked for the United Nations and World Bank to help doctors map malaria outbreaks and support development projects in places such as Afghanistan, Nigeria and Somalia.

Over the years, it painstakingly stitched together a map of the world relying on proprietary and public data sources. One of its major contributors is OpenStreetMap, a project whose maps are created and updated by users around the world, much like Wikipedia. Bloomberg