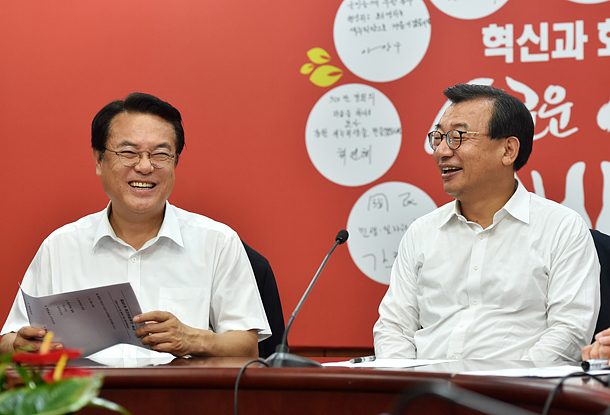 A presidential luncheon to celebrate the ruling party’s election of new leadership is scheduled for today, reflecting the Blue House’s optimistic sentiment toward the victories won by allies of the president in this week’s national convention.

The Saenuri Party elected Lee, a politician from South Jeolla who supported Park for more than a decade, as the new chairman and formed the Supreme Council through the national convention on Tuesday.

“Kim visited this morning and proposed a luncheon with President Park at the Blue House,” said Lee. “I accepted the offer.”

Chairman Lee and other members of the Supreme Council will participate in the luncheon. The nine-member council is comprised of the chairman, floor leader, chief policymaker, five elected members and one member to be appointed by the chairman.

Chairman Lee is a long-time confidant of Park. After serving her as a spokesman since 2004, he worked as the senior political secretary and senior public affairs secretary in the Park Blue House. Of the five new Supreme Council members, Choi, Lee, Choi and Yoo are Park loyalists while Kang is the only adversary.

Park attended the national convention on Tuesday and gave a speech expressing her interest in the ruling party’s leadership race following its humiliating defeat in the April general election. In her 15-minute speech, Park stressed the importance of change and unity for the party, which is split between Park loyalists and her opponents. She received 27 rounds of enthusiastic applause.

The Blue House appeared upbeat, as a smooth relationship with the ruling party is expected for the remainder of her tenure, which ends in February 2018. “As Park said Tuesday, the Saenuri Party’s election of the new leadership should serve as an opportunity to accomplish unity and innovation to bring about changes and reconciliation,” said presidential spokesman Jung Youn-kuk. “The party should restore confidence in the people.”

In his meeting on Wednesday morning with Park’s envoy Kim, Chairman Lee promised an amicable relationship with the Blue House, issuing an indirect warning to Park adversaries.

Lee also said he will directly communicate with the president, often criticized as high-handed and stubborn.

“Working with the president for 13 years as a political partner,” he said. “I am one of the people who talked to her on the phone most often.”

On his first day on the job, Lee visited the National Cemetery to pay respect to Korea’s past leaders. He then said the top priority of his term will be supporting the president to look after urgent issues of economy and national security.

“Preparing the party for the next presidential election is important for the next one year and half,” he said, “but resolving the issues concerning the country, the people, their livelihood, economy and security, with the president at the center, is more urgent.”

He then hosted the first Supreme Council meeting in the morning. At the meeting, Kang, the only Park adversary elected to the council, demanded an investigation into the allegations that the ruling party’s nomination process for the April general election was influenced by key associates of the president. Park loyalists including Hyun Ki-hwan, who served as the senior political affairs secretary to the president before the general election, were accused of having strong-armed a candidate to change his constituency.

Kang’s comment promoted the new chairman to immediately issue a gag order to the leadership. Lee said only the chairman and the floor leader would be allowed to speak openly at the beginning of the meeting, while the rest of the members’ remarks won’t be made public. After a closed-door discussion, the council will announce a more refined conclusion through a spokesman, Lee said.