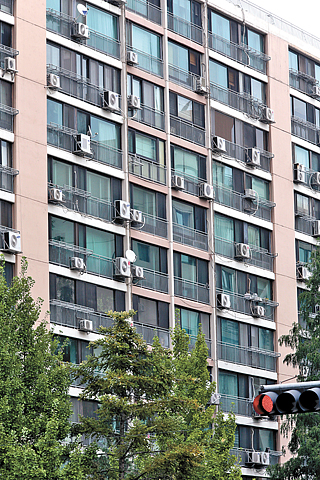 Kang Chan-soo couldn’t believe his eyes when he got his most recent electricity bill. In an effort to fight the summer heat wave, his family relied on air-conditioning last month. Kang had to pay a heavy price: 670,000 won ($611).

Kang, an office worker living in Jongno District, central Seoul, called an urgent family meeting. There must be a way to use much less electricity this month, he thought. But laying his eyes upon his 87-year-old mom and 6-year-old son, who suffers from an overheating disorder, very little could be done. The air conditioner would stay on.

“The air conditioner has become a real pain in the neck,” said Kang. “It’s hard to tell my family not to use it simply because I have to pay the bill.”

As the summer heat wave continues — with no relief in sight until next week — a lot of people are asking a perennial question: Why doesn’t the government change the progressive billing system for household electricity usage?

In a press briefing Tuesday, Chae Hee-bong, who heads the Office of Energy and Resources at the Ministry of Trade, Industry and Energy, brushed off calls for a change, saying the country might suffer power shortages and blackouts if it encourages the use of air-conditioning.

At one point, the official took a direct jab at the widely used term for bloated electricity bills, “poktan yogeum,” which roughly translates as “bomb fees.” It would be an “exaggeration,” Chae said, to use such a term after a person uses so much electricity in the first place.
In Korea, a progressive billing system is applied to household electricity usage, which means that people pay more per unit if they use more. For businesses and industries, there is no such system.

The system was established during the 1970s oil crisis in order to save energy for industries. Since then, the public has consistently called on the government to fix the law, usually when the bills climb at the height of summer. No progress has been made.

According to sources in the local home appliances industry, around 80 percent of all households in Korea own an air conditioner, but very few people use them as much as they would like.

Kim Sang-hyun, who bought a 2.4 million won air conditioner last June, said he was in that group.

“I’ve turned on the device less than 10 times so far,” said Kim. “I’m so afraid of the bills that I go to a nearby supermarket or coffee shop to escape the heat.”

Apartment dwellers in Goyang, Gyeonggi, are so frustrated with the status quo that they’ve decided to take matters into their own hands. A federation composed of leaders from each apartment complex said they would start a national petition requesting the government to change the system.

“The progressive billing system scares me more than the summer heat,” said Chae Soo-cheon, 72, head of the federation. A new system, he added, would have to reflect current economic realities. One way, he suggested, is to apply the progressive pricing method after households use 400 kilowatts.

Woo Sang-ho, floor leader of the main opposition Minjoo Party, vowed Wednesday that the party would make efforts to “innovatively change” the electricity billing system, saying the public is paying too much for the electricity they’re using.

Heat wave warnings have been issued by the Korea Meteorological Administration in Seoul every single day since July 31. A heat wave warning is issued when the daytime high hits 33 degrees Celsius (91.4 degrees Fahrenheit) for at least two consecutive days. This year, 11 days saw temperatures exceeding 33 degrees.

As of Wednesday, Seoul has also experienced a total of 18 tropical nights since July. That’s the highest number Korea has ever experienced in the same period since 1994, when 28 days were measured. A night is dubbed tropical if the temperature remains 25 degrees or above throughout the night.

“This year is definitely hotter than previous years,” said Kim Yong-jin, an official at the Korea Meteorological Administration, adding the scorching heat will smother the nation until Sunday.