Itaewon is multicultural, but it’s more salad than melting pot

Itaewon is multicultural, but it’s more salad than melting pot 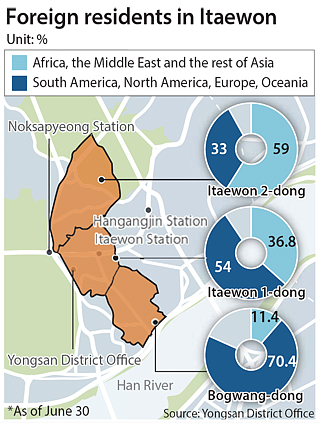 A demographic split is happening between the northern and southern regions of Itaewon in Yongsan District, central Seoul.

While more European and North American foreigners are settling in the northern parts, residents from Africa, the Middle East and the rest of Asia tend to settle in the southern areas, data shows.

On the northern side, Gyeongridan-gil in Itaewon 2-dong is filled during the day with foreigners enjoying coffee or brunch at outdoor cafes and many of the stores are run by foreigners, as well, selling items such as small bracelets or stationery from foreign countries.

“There were times when I felt lonely living in Korea,” said a German man, 25, who runs a bagel store in Gyeongridan-gil. “That brought me to this area often. I made a lot of friends here, including my Canadian girlfriend.”

At the end of the road live foreign embassy workers in houses with yards and gardens. Most of these workers are from Europe or North America, according to a local real estate agent.

According to the Yongsan District Office, 59 percent of foreign residents in Itaewon 2-dong are of American, European, Australian or New Zealand origin.

The atmosphere changes quite a bit as one walks south to Itaewon 1-dong and Bogwang-dong, where stores sell halal food, people wear hijabs and Arabic is easily spotted on local store signs and notices (one such notice warns residents not to litter).

The Seoul Central Mosque is also situated nearby.

The demographics of this area are quite different from that of Itaewon 2-dong.

Out of the 1,129 residents of Bogwang-dong, about 70 percent are from Africa, the Middle East and the rest of Asia. People with American, European, Australian or New Zealand backgrounds make up only 11 percent.

The underdeveloped regions around Bogwang-dong were designated for redevelopment under the New Town Project in 2003. But the project has yet to take off, and Africans and Asians seeking low rents have since started living in these houses.

“It is a natural phenomenon for people sharing similar backgrounds to live in the same region,” said Kim Chan-ho, professor of cultural anthropology at Sungkonghoe University.

Others, however, such as Kim Young-wook, professor of architectural engineering at Sejong University, are more critical. Kim said, “spatial segregation may lead to conflict.”