Men’s football moves ahead to quarterfinals

Men’s football moves ahead to quarterfinals 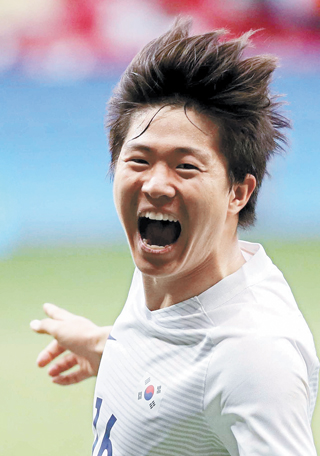 Korea’s Kwon Chang-hoon celebrates after scoring a goal against Mexico on Wednesday in Brasilia, Brazil. [NEWSIS]

Before Shin Tae-yong and his squad left Korea bound for Brazil in July to participate in the Summer Games in Rio de Janeiro, skeptics were pessimistic about their chances at a medal, let alone whether they would be able to advance to the quarterfinals from the preliminary stage.

Although Shin said they would go to the knockout stage as the winner of Group C with two wins and one draw, many doubted him, as this year’s team was considered perhaps the worst that Korea has ever sent to the Summer Games. While Korea had won bronze in the last Games, expectations that this year’s team would win any medal eluded Shin and the players.

But, just as Shin predicted, the Korean squad is emerging out of Group C as its winner with two wins and one draw, even taking down the defending champion Mexico and holding European powerhouse Germany to a draw along the way.

During the final match in the preliminaries against Mexico at Mane Garrincha Stadium in Brasilia on Wednesday, Korea’s Kwon Chang-hoon scored the game winner in the second half of the match to lift Korea 1-0 over the reigning gold medalist.

After a rather uneventful first half of the match, Korea struggled in the second half, busy just to keep up with and defend against Mexico’s relentless attacks. Mexico simply dominated on the pitch, constantly threatening the Korean side with lethal shots, such as the one in the 62nd minute when a bullet shot by Carlos Cisneros bounced off the left goal post. The explosive shot travelled at such a high velocity that there was no way for the Korean goalkeeper Gu Sung-yun to react in time.

After breathing a sigh of relief, Korean players tried to gather themselves and bring at least a small amount of momentum to their offensive effort by substituting in the wild card forward Suk Hyun-jun, who scored against Fiji as well as against Germany.

The silence in the game finally broke in the 77th minute. Following a set-piece play from a corner kick that was rendered useless, Kwon took control of the loose ball and penetrated Mexico’s penalty box. He took a shot with his left foot and it travelled past Korean and Mexican players inside the box to rattle Mexico’s net.

By edging Mexico 1-0 at the end of the day, Korea had claimed the top spot in the group rankings to advance to the next round to take on Honduras, the runner-up from Group D after Portugal. Germany, who pummeled Fiji 10-0 on the same day, is advancing to the quarterfinals with Korea as the runner-up in Group C to take on Portugal next.

Although the team successfully surmounted all the odds, it has been a rough ride so far for Shin and the players.

Shin coming to the helm of the team was as sudden an event as any. Lee Kwang-jong, the U-23 manager before Shin, left the managerial post when he was diagnosed with acute leukemia. Shin, who was a coach for the senior national team, was given the commanding position out of the blue.

“I am a little puzzled taking over the position so abruptly,” Shin said. “I don’t even know who is on my team.”

And just like that, Shin and the squad started their journey to Rio.

Even after Shin finally found his stride, there were other obstacles lying in wait for the team on their way to Rio.

Selecting wild cards was one of the big issues. Realizing its defensive weakness could potentially bring the squad to its knees, Shin had to exploit the wild card system to bolster its defensive lineup. Shin hoped to bring in defender Hong Jeong-ho, who then played for FC Augsburg of Bundesliga, along with Jang Hyun-soo, who is now the team’s captain. But Hong’s participation was aborted as the club, which is not obliged to send its players since the Olympics is not a FIFA-sanctioned event, decided to not allow Hong go in time for the Games.

Shin then turned his eyes to Suk. Along with Son Heung-min, who had been nominated as the wild card back in March, Shin would now fill out two wild card spots with offensive players, a move that was unprecedented and provoked questions that Shin might be focusing too much on offense.

But little did skeptics know that Shin’s decision would turn out to be the very thing that determined the team’s success. Suk, who has played in all three matches in the group stage, has brought the team out of the pinch every time, adding goals as well as physically challenging opponents up front.

Now that the team has silenced all skepticism, the question remains whether it will live up to its goal to match or even outperform the squad from the 2012 London Games.