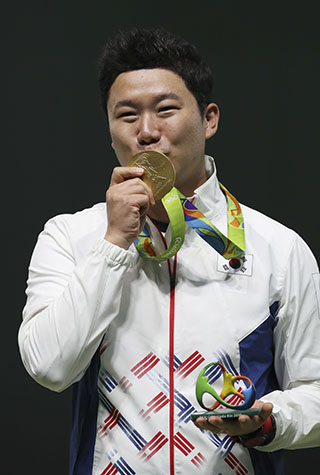 After a heartbreaking defeat earlier in this year’s Summer Games during the 10-meter air pistol event, Jin Jong-oh finally showed himself to be the world’s top marksman by claiming his third Olympic gold in the 50-meter pistol event on Wednesday at the Olympic Shooting Centre in Rio de Janeiro, Brazil.

During his historic run to become the first shooter in the world to win three successive Olympic titles in a single event, Jin shot an Olympic record of 193.7 points and defeated Vietnam’s Hoang Xuan Vinh, the winner of the 10-meter air pistol event and the first Olympian in Vietnam’s history to clinch gold, on his way to the top of the podium.