Retail sales fall in shipbuilding regions, but rise in Jeju

Retail sales fall in shipbuilding regions, but rise in Jeju 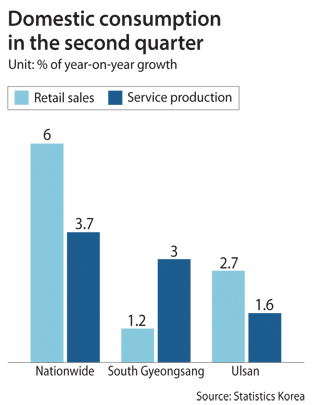 The restructuring of the shipping and shipbuilding industries is taking its toll on domestic consumption.

While retail sales rose 6 percent nationwide year on year in the second quarter, according to Statistics Korea, the rate for South Gyeongsang and Ulsan, where the shipbuilding and shipping industries are concentrated, was only 1.2 percent and 2.7 percent each.

“Sales at department stores and large retailers dropped in South Gyeongsang and Ulsan in the second quarter compared to the previous year, and we believe that ongoing restructuring is one of the factors that affected the figure,” a Statistics Korea official said Thursday. “However, nationwide consumption improved as there were more vehicles sold this year compared to the previous year, largely thanks to the individual consumption tax cut on cars.”

Department store sales in South Gyeongsang and Ulsan fell 1.5 percent and 4.9 percent each.

The southern island of Jeju was the only region in Korea that saw double-digit growth, at 13.2 percent. Sales at large retailers, including the island’s duty-free stores, rose a whopping 30.1 percent year on year.

The statistics agency noted that there were more tourists visiting the island this year compared to the previous year, when the Middle East respiratory syndrome scare hurt the nation’s tourism industry.

Retail sales in Incheon rose 8 percent, and the figure for Seoul went up 6.5 percent in the second quarter. Statistics Korea attributed the growth in these two big cities to improved sales at large retailers and car dealers.

Service production in all 16 major cities and provinces grew in the second quarter. The figure rose 3.7 percent nationwide, and it was highest in Jeju with 8.7 percent.

“The figure for Jeju rose significantly as finance-related businesses and retailers performed very well in the second quarter of this year,” said Son Eun-rak, a director at Statistics Korea.

In fact, Jeju’s real estate and transportation sectors saw 22 percent and 20.2 percent growth each. The financial sector rose 11.7 percent compared to the previous year, and the figure for the island’s retail industry went up 7.2 percent during the same period.

Statistics Korea said the figures in Ulsan and South Gyeongsang were relatively low because the market for restaurants and real estate was slow compared to the previous year.