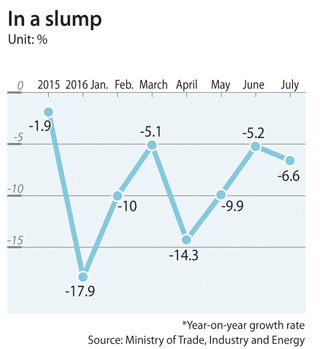 Exports of information and communications technology (ICT) products fell for the 10th consecutive month as cellphones and televisions continued to be weak in foreign markets.

ICT exports declined 6.6 percent year on year in July to $13.02 billion, the Ministry of Trade, Industry and Energy said on Thursday. After posting a year-on-year decline of 1.6 percent last October, exports have continued on a downward slide.

“Exports of cellphones dropped 10.1 percent year on year, and display products fell 19.2 percent,” said Kim Jong-joo, a director at the ministry. “Demand for displays is falling, and oversupply by Chinese manufacturers is hurting local display manufacturers.”

The ministry cited new midprice smartphones produced by Chinese manufacturers as one of the biggest factors for the downfall in cellphone exports.

Exports of computer-related products such as auxiliary storage, on the other hand, jumped 29.3 percent to $600 million. However, computers themselves dropped 24.2 percent year on year due to the demand.

Locally-manufactured computers and related goods were most popular in China last month, while demand fell significantly in Latin America.

The ministry said the exports of computers will be slow as the market size is likely to be smaller. The global personal computer market size will grow just 0.02 percent year on year in 2016, according to market research firm International Data Corporation. The figure will drop 0.6 percent in 2019, the ministry said.

Overall exports to Vietnam rose 24 percent year on year and increased to India 17.6 percent during the same period. However, exports to China and the United States fell 9.5 percent and 10.7 percent each.

Exports of televisions and computers to the United States rose, while the figure for cellphones fell near 35 percent compared to the previous year.

“The overall export figure fell as the global economy continues to be slow and local companies start to operate manufacturing plants in foreign countries,” Kim said.

In fact, exports to China, the country that accounts for 50 percent of total export volume, declined for eight consecutive months.

Imports from Vietnam rose by 56.8 percent in July, while the figure fell in most other major trading partners, including China, Japan and the United States.