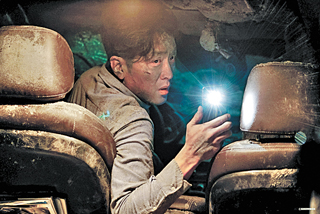 You’re driving home through a tunnel when, suddenly, it collapses around you. You’re trapped - what do you do?

The situation has enough realism to send chills up your spine.

Jeong-su (Ha Jung-woo) is a car salesman who has just inked a big deal. With a joyous heart and a birthday cake for his daughter, he drives back home. But after entering a tunnel, it suddenly crumbles. He’s alone, with just a partially charged phone, two water bottles and the cake.

Making matters worse, it may be days before help can arrive. The commander of the rescue team, Dae-gyeong (Oh Dal-su), tries his hardest to enter the tunnel but it looks almost impossible.

Meanwhile, his wife Se-hyun (Bae Doo-na) sends messages of hope to her husband through the radio, which is his only connection with the outside world.

The film suggests that anyone might be Jeong-su in real life while also displaying a world where everyone is only looking out for themselves. The government is busy covering up the calamity, the media is only thinking about getting the scoop, the construction company is denying its responsibility and people are becoming disinterested as the days pass by. “Tunnel” is different from other disaster films in its narrow focus on a single victim, and it’s clear that director Kim Seong-hun wants audiences to consider the value of a person’s life.

Everyday the princess misses her motherland, not knowing when she can return. To Japan, she is a symbol of hope for the Korean people, and as such, she’s something to be destroyed.

In such a dire situation, one of the princess’s childhood friends, Jang-han (Park Hae-il), appears to help her fight back.

Director Hur Jin-ho is best known for his films that deal with different kinds of romantic relationships such as “A Good Rain Knows” (2009), “Five Senses of Eros” (2009) and “April Snow” (2005). This is his first historical drama.

“The Last Princess” is based on a novel of the same name that was a bestseller when it was released in 2009. It was a mixture of fact and fiction, but as many young people are totally unfamiliar with Princess Deokhye, the novel has been a good place to start.

According to actor Park, Hur is a veteran at exploring the emotions of his characters in a way that audiences find captivating.

Still, the film doesn’t try to squeeze tears out of moviegoers, instead plainly displaying the sorrowful life and history of a weak woman who fails to be the hope her country wants. 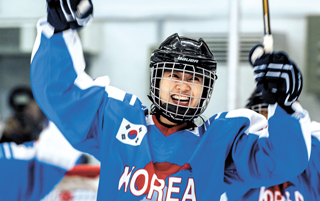 Six totally different players have congregated to form Korea’s first women’s national ice hockey team in order to compete in the 2003 Asian Winter Games held in Aomori Prefecture, Japan. Nobody believes they’ll make it to the games, but to the group, the lack of support adds more fuel to the fire.

All have different careers totally unrelated to ice hockey, and even though they don’t harmonize well, they unite for a singular goal: to participate in the games and earn the first medal.

Only two players have any skating experience. Ji-won (Soo Ae) is the only former ice hockey player, who once played in Finland. She has come back to Korea to participate in the national team through a nagging offer from Dae-woong (Oh Dal-su), the coach of the team. Chae-gyeong (Oh Yeon-seo), meanwhile, is a former short track speed skater who has been dismissed due to a bad attitude.

The film is based on a real story just like the original film in the series, “Take Off” (2009), which was about ski jumping. The follow-up showcases more active and speedy scenes than the former.

Though there are fictional elements in the movie, as of 2016, the team is still Korea’s only women’s ice hockey squad.

Director Kim Jong-hyun has said the film is focused on portraying the lively, passionate bonds between women. It’s also a touching story of overcoming breathtaking challenges to achieve a dream. 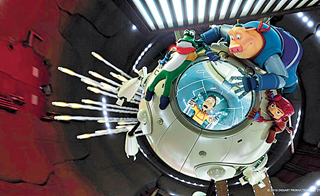 The villainous Oscar is coming to destroy the city using a special ring, and the only thing that stands in his way are the theme park mechanic Sam and his three eccentric robots. Sam plans to propose to his childhood sweetheart Sue, but after accidentally swapping rings with Oscar, he goes on the hunt to track down his “bling” - and save the city.

The animated film is finally being released after four years of production. It features the music directors and other creative talents from hit Korean films like “Snowpiercer” (2013), “The Face Reader” (2013) and “Roaring Currents” (2013).

The film’s setting will trigger the imagination of the moviegoers who have wondered what cities of the future will look like, with flying cars up in the sky and artificial intelligence (AI) walking down the streets. The film itself is also a testament to how far CGI has developed, and its action scenes including chases and explosions lend the film a chaotic, energetic ambience.

In this spellbinding, imaginative adventure,

10-year-old orphan Sophie (Ruby Barnhill) meets a giant in the middle of the night and is taken to Giant Country. The elderly giant, also known as the Big Friendly Giant (BFG), has the ability to control dreams.

At first, she does not believe him, particularly as her insomnia means she rarely dreams, but he proves his skill by giving her a nightmare.

As time passes, they develop a strong bond. But other giants are not as benevolent as BFG - they eat people, and if Sophie’s existence is revealed, she’ll be in grave danger. However, when the pair learns of the other giants’ monstrous schemes, Sophie and BFG have no choice but to try and stop them.

The film is based on the novel of same name written in 1982 by Roald Dahl. Dahl is widely known to moviegoers for his famous novel “Charlie and the Chocolate Factory,” which has been adapted for the screen several times, most recently by Tim Burton.

This most recent movie was directed by another legendary filmmaker, Steven Spielberg. It is his first collaboration with Walt Disney Pictures, which has had a streak of animated successes recently with “Frozen” (2013), “Zootopia” (2016) and the recent “Finding Dory” (2016). 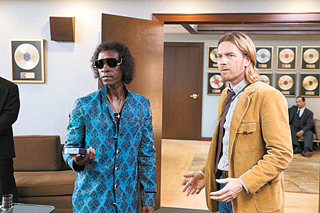 The biographical film “Miles Ahead” draws on the life of Miles Davis (1926-91), one of history’s most celebrated jazz musicians. Don Cheadle both directs and stars in the film. “Miles Ahead” is also the name of a 1957 album by Davis.

In the film, Davis is hugely popular and on his way to inextricably tying his name to modern jazz. But in the late 1970s, the musician suddenly disappears from the public eye for five years.

The fictional character Dave Braden (Ewan McGregor), a reporter of the Rolling Stone, goes after him in search of an exclusive story.

He learns that Davis has a secret album that has been stolen, and the two team up to get it back.

Davis is remembered as always being ahead of his time, possessing ingenuous musical abilities and developing subgenres like hard pop, cool jazz and fusion jazz. He would’ve turned 90 this year.

Cheadle has been acclaimed for both producing and acting in films such as “Hotel Rwanda” (2004), “Crash” (2005) and the “Iron Man” series. In his teens, Cheadle was a huge Davis fan, and his affection for the musician and his work are evident in “Miles Ahead.”