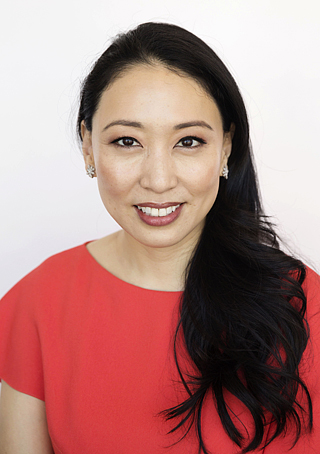 Judy Joo poses for a portrait in New York to promote her book, “Korean Food Made Simple,” on June 16. [AP/NEWSIS]

NEW YORK - The American palate has gotten sophisticated enough that kimchi is considered a health food and bibimbap can be ordered alongside mac and cheese.

But cooking Korean food still seems like a Herculean task.

When you start thinking about the ingredients involved, like gochujang (fermented chili paste) and soju (a spirit sometimes used like cooking wine), and you may be tempted to order takeout.

Don’t. Judy Joo is here to tell you that it’s not as complicated as it sounds. Her new book, “Korean Food Made Simple,” underscores how universal Korean dishes are - from BBQ and fried chicken to burgers - while introducing key ingredients and cooking methods that have made the cuisine so appealing of late.

“Everybody loves something new, and people are realizing that it’s not that foreign,” says Joo, a self-proclaimed “Jersey girl” who has an international profile with her restaurants Jinjuu in London and Hong Kong.

“At the end of the day, it’s BBQ. You’re grilling. It’s rice and it’s dumplings. So it’s things that people are very familiar with anyway. And some of the dishes are extremely welcoming and have a lot of kind of cross-cultural bridges.’’

Joo, a former banker and engineering grad, has been building those bridges for some time now, as host of the Cooking Channel show that shares the same name of her book.

Q. How do you try and demystify Korean food?

A. I think the hardest thing with ethnic cuisine is grocery shopping. It really is, but now with things like Amazon, it really kind of makes it really easy for everyone to be able to just order it. ... It’s really just a matter of getting through that first hurdle, and you can make a lot of different things with just a few ingredients that you might have that are just essential in your pantry.

What are the biggest mistakes people make with Korean food?

There have been discussions in the culinary world about cultural appropriation and food. What do you think of the issue?

With any ethnic group that comes over to this country, food is going to evolve. Italian wedding soup, that doesn’t exist in Italy. It’s a very natural evolution I think. I think especially now, when people are traveling so much, and cultural influences and borders are being fudged and stuff, you’re getting so many different types of inspirations everywhere, so you’re only going to have more mashups, like Korean tacos.

Are certain fusions that are more natural for Korean food?

I think the whole Korean-Mexican thing, we call it KoMex. And that came out of Los Angeles, mostly. With the large Korean population, it’s only a matter of time before the Koreans and the Mexicans start to mingle, and make Korean-Mexican food,. It’s also because the flavors work well together: Koreans love spice, Mexicans love spice. They love chilies, we love chilies, so it just kind of all works.

How do you do to stay in shape with all the eating you have to do?

I really believe in epigenetics. That’s like, you’re kind of born with a genetic makeup for the food you’re supposed to eat. So I’m supposed to eat rice. Maybe I’m not supposed to eat bread, but I’m supposed to eat rice. You know what I mean? I always feel healthier and better and I feel like I digest better when I eat the food that is like meant for me. ... And Korean food is to me is always very well balanced, and you’re eating so many vegetables. I had kimchi for breakfast this morning! But you also have to stay active. I’m running around all day.

You are exploring more restaurants and are preparing for a new season of your Cooking Channel show. What’s next for you?