Webseries pokes fun at the K-drama

Webseries pokes fun at the K-drama 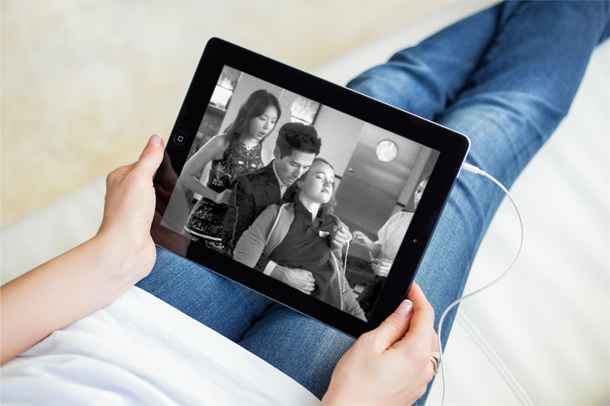 “Although I thought the drama was stupid, I found myself watching the entire thing.”

That’s how one blogger described the American webseries, “Dramaworld,” which parodies the cliches of Korean dramas.

“The familiar scenes in the webseries made me laugh out loud,” another blogger wrote, adding that a character slapping another character with kimchi, similar to a scene from the MBC drama “Everyone Kimchi” (2014), was particularly funny.

The 10-episode series unfolds as a 20-year-old Caucasian K-drama lover, Claire, falls into a fictional K-drama world. Believing her role to be the facilitator that connects the male and female leads, she tries hard to make them fall in love. In the process, Claire points out many of the things common in K-dramas, such as the frequent appearance of product placement.

Just like many Korean dramas, the comedy show portrays four typical characters: a good-looking chaebol male lead, his snobbish mother, an average-looking female lead from ordinary family and a pretty but evil woman that harasses the main female character.

Their world is governed by a rule book that Claire always carries around.

Some of those rules include that male characters - usually in good shape - must take a steamy shower and always carry a drunk woman on the back even if she’s a stranger. Catching a falling woman is also compulsory for the men.

The comedy initially launched in April in the United States through the video streaming platform Viki, and it became available in Korea through Netflix in July.

Although the drama is not mainstream, it was well-received in the United States, and has since been subtitled into 39 languages on Viki. That was even higher than the number of languages seen by the latest mega-hit drama “The Descendants of the Sun,” which had 37. Viewers are responsible for translating subtitles on the streaming service, and the number of languages translated is correlated with a show’s popularity.

Some Korean viewers, however, expressed their dissatisfaction with the show on the Internet, claiming that the characters’ muddled Korean pronunciation was a distraction from the story.

Regardless of positive or negative views, such parodies are effective in spreading Hallyu, or the Korean Wave of popular culture, according to Lee Taek-gwang, a professor of American studies at Kyung-hee University and cultural critic.

“Korean dramas have typical characteristics such as characters that often shout out loud or cry. And to foreigners that don’t like that, a parody like this can make them laugh, and might even endear them to K-dramas. For others, it can serve as exposure to an unfamiliar part of Korea, just like the megahit song “Gangnam Style,” a parody of Gangnam District, which drew visitors to the area.”
BY JIN MIN-JI[jin.minji@joongang.co.kr]