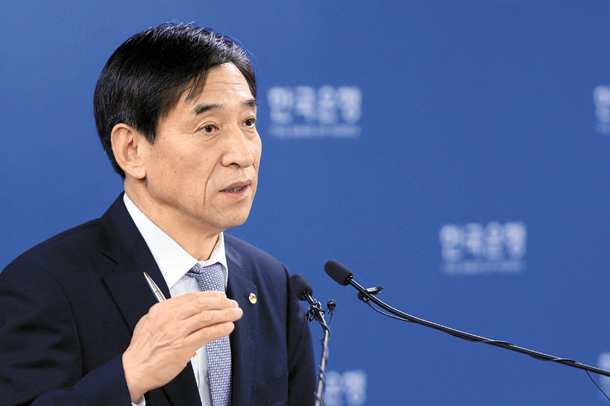 Bank of Korea Gov. Lee Ju-yeol, shown at a press briefing on Thursday, said one of the main reasons that the monetary policy committee unanimously decided to keep the key interest rate at 1.25 percent this month was largely because there have been signs that the economy was improving. [NEWSIS]

The central bank kept the key interest rate unchanged for the second consecutive month on the grounds that it needs to monitor the effect that the economic stimulus, including the supplementary budget pushed by the government, would have on the economy.

“We considered the need to monitor the policy effects caused by the interest rate cut [in June] and the supplementary budget as well as the changes in the global and domestic economic conditions especially as there is a high uncertainty regarding the path of the economic growth,” Bank of Korea (BOK) Gov. Lee Ju-yeol said in a press briefing on Thursday.

“Additionally we decided to maintain the key rate at the current level as we saw the need to be mindful of the risks against financial stability as household debt continues to grow at a rapid pace.”

The nation’s key interest rate has remained at 1.25 percent after the central bank shaved off 0.25 percentage points to the market’s surprise in June. At the time the bank’s governor said it was a preemptive move to counter the possibility of the economy from retreating further especially with the corporate restructuring of the shipping and shipbuilding sector expecting to kick in during the second half.

The bank’s move was projected earlier by the market as a survey by the Korea Financial Investment Association showed that 96 percent of 101 bond experts predicted a freeze on the interest rate. Even the BOK’s Lee, during a recent forum held at the National Assembly, stressed the limits of the monetary policy in boosting the economy. He urged a more aggressive fiscal policy to the central government and the National Assembly.

Lee said one of the main reason that the monetary policy committee unanimously decided to hold the key interest rate this month was largely because there have been signs the economy was improving.

“When you looked at the changed conditions since Brexit, [the global market] has relatively stabilized thanks to the joint policy efforts by major economies,” Lee said. “Although the domestic economy continues to struggle, when you look at the fundamental flow it shows a continuum of a mild growth.

“As our external soundness has been improving thanks to the continuing surplus on the current account when compared to other countries, we have the leisure [to implement additional] fiscal and monetary policies.”

The market, however, has also been projecting that the Bank of Korea may likely attempt another rate cut as early as next month or in October before the U.S. Federal Reserve will start normalizing its low interest rates at the end of the year. Several economic indicators, including job reports, have improved.

BNP Paribas in a report released on Thursday projected another rate cut in October.

“Weak demand growth in key external markets - particularly China, Europe and Japan - makes it difficult to foresee a material improvement in the fortunes of Korean exporters,” said Mark Walton, a BNP Paribas analyst. “There are also signs that domestic demand prospects are on thin ice, despite the apparently more positive signals of late.”

Walton added that the supplementary budget will add “modestly” to the nation’s economic growth despite the recent uptick. In fact, Lee kept the possibility of another interest rate cut open.

“After several cuts our interest rate has been lowered to 1.25 percent,” Lee said. “But it is true that the practical effect [of the interest rate cut on the economy] has reached its lowest limit.”