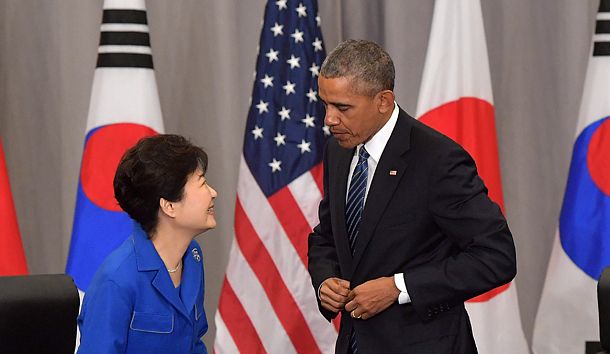 U.S. Republican presidential candidate Donald Trump has a mutated view on alliances. His stance is remote from the Republican mainstream that considers alliances as a key axis of America’s global strategy. Instead, he approaches from cost effectiveness. He claims that Korea, Japan and Germany are free-riding on security. On August 5, he once again said that he would withdraw stationed forces unless these countries pay more for the shared cost. It is the ultimate in new isolationism.

In contrast, Democratic presidential candidate Hillary Clinton has conservative views on alliances. She shares a lot with mainstream Republicans. Look at her national security address in June. She praised the “power of allies” in discussing the North Korean threat. She said, “It is the legacy of American troops who fought and died to secure those bonds.”

It is notable that the Hillary camp included the words “We will honor our historic commitment to Japan” in the Democratic Party platform.

While it was not in the first draft, it was added to the final draft. Some say that it was influenced by Japanese lobbying efforts. It reflects Japan’s sense of crisis over the atmosphere in the United States. Regardless of the presidential election outcome, the isolationism fanned by Trump and supporting his popularity will have significant consequences.

The Thaad deployment of the U.S. Forces in Korea was decided at this sensitive time. To the United States, the primary objective of Thaad is the defense of 28,500 U.S. Forces stationed in Korea. It is hard to imagine stationing troops without guaranteed safety. The U.S. Forces moved from Dongducheon and Euijeongbu in the front to Pyeongtaek, Daegu and Busan in the rear in order to avoid the role of a trip wire.

North Korea’s long range artillery has also played a part. North Korea now tests ballistic missiles from mobile launchers or submarines that are hard to detect. Will the U.S. Forces continue to stay in Korea without multi-dimensional defense? Pyongyang may ultimately want withdrawal of the USFK. It is a mistake to worry about aggravating Korea-China relations and consider Korea-US alliance constant. There have never been eternal allies. Alliance is a living organism that lives on trust.

It is also problematic to equate an ally with a friendly partner. The Korea-U.S. alliance is the foundation of Korea’s security. Investing in alliance has brought peace and stability to the Korean Peninsula, and it has bolstered the economic development. We are not talking about blind alliance here. While we make our demands we need to be careful not to shake the foundation of security. Moreover, the geopolitical changes are progressing. Geopolitical elements that cannot be changed, such as geography, history, ethnicity, religion and resources affect the strategies of countries in the region. China’s response to Thaad and the Korean Peninsula affairs are based on these geopolitical issues.

Alliance with a non-Asian country sharing values of liberty, democracy and human rights is a prerequisite for security. Think about the late Joseon period — there was no balance. It is not fitting to say Korea is in between the United States and China in security. The Korea-China relationship is valuable, but China does not protect Korea. Let’s be wary of sentimentality when it comes to security.