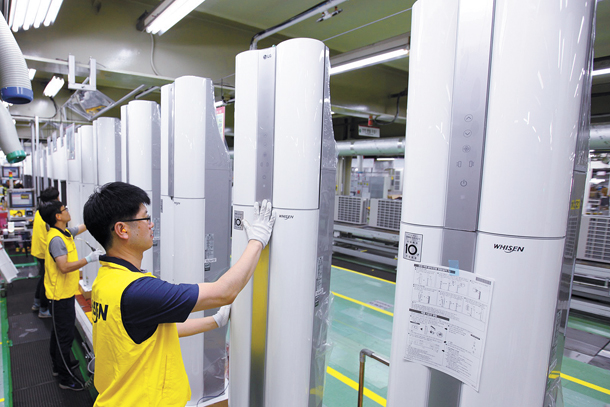 An employee on an assembly line works on LG Electronics’ Whisen air conditioner at the company’s plant in Changwon, South Gyeongsang. [LG ELECTRONICS]

In previous summers, 32-year-old Yoo Min-hye, who lives together with her parents, would not normally use the family’s old air conditioner, which was both loud and not energy-efficient.

But with the record number of so-called tropical nights, in which the overnight low stays above 25 degrees Celsius (77 degrees Fahrenheit), making this summer especially unbearable, she finally relented and replaced the family’s 10-year-old unit.

A suffocating heat wave sweeping the nation has led sales of air conditioners to surge to a peak.

For discount retail chain E-Mart, daily sales of air conditioners reached an all-time high on Sunday of 2.5 billion won ($2.3 million). Boosted by the record, air conditioners brought in the most earnings of all E-Mart products in the first week of August, accounting for 9.5 billion won, a 53 percent year-on-year increase. 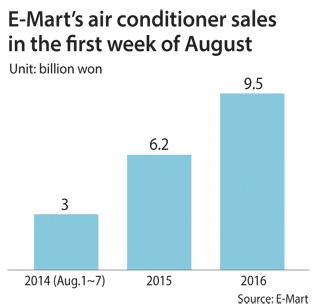 “This year’s summer is reported to have the most number of tropical nights since 1994, and this greatly boosted sales of our air conditioners in August,” an E-Mart spokesperson said Thursday.

Traditionally, E-Mart’s most popular product in August has been beer. While air conditioners only brought in 3 billion won during the first week of August 2014, ranking 11th in terms of revenue size, beer raked in 5.8 billion won.

But this year, air conditioners soared to the top of the list, followed by beer with 6.4 billion won in earning and ramyeon, Korean instant noodles, with 4.9 billion won.

“We cannot disclose the exact revenue from our sales, but the heat has pushed up sales of both air conditioners and fans in July compared to the previous year,” a Lotte Mart spokesperson said.

Manufacturers of air conditioners are increasing their production to cater to the rising demand.

“We used to end production of air conditioners entering August, but this year, we plan to maintain our production until mid-August as the hot weather continues and demand for air conditioners surges” said Ryu Jae-cheol, manager of the refrigeration and air conditioning business division at LG Electronics.

The government also propelled air conditioner sales with its announcement last month to hand out refunds on energy-efficient home appliance purchases. Customers are able to receive 10 percent refunds of up to 200,000 won on purchases of home appliances graded level one based on the government’s energy efficiency standards. The incentive is valid on all purchases made from July through September.

While a progressive electricity billing system, in which people pay more per unit as they use more energy, has deterred many from using their air conditioners out of concern for hefty utility bills, the government on Thursday announced a temporary revision to the system that would expand the energy use limit of each payment tier.

The government said the revision, which will only last until September, is expected to cut as much as 20 percent off utility bills and benefit the country’s 22 million households, leading to more uses of air conditioners.