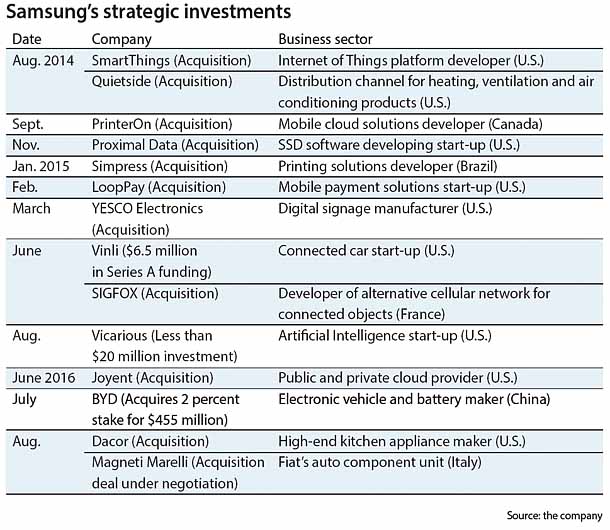 Dacor will become a wholly owned subsidiary of Samsung Electronics America while maintaining its corporate identity and brand, with no changes to its operations and U.S.-based manufacturing, Samsung said. The California-based company has been designing and manufacturing high-end kitchen appliances since 1965.

The deal marks the company’s “continued investment in the home appliance market and an expansion of its portfolio to include ultra-premium home appliances,” the tech giant said in a statement.

The world’s top TV manufacturer unveiled a “Chef Collection” brand in March 2014, releasing refrigerators, washing machines and ovens that include cutting-edge technologies and are twice as expensive or more -- than mass-market appliances.

But Samsung has struggled in the world’s No. 1 economy and needs closer ties to builders, which the acquisition of Dacor will bring.

The Thursday announcement came a week after news leaked of Samsung’s ongoing negotiation to acquire Magneti Marelli, an auto component unit of Italian carmaker Fiat Chrysler Automobiles. Even though Samsung has yet to officially acknowledge the deal, which is estimated at over $3 billion, an executive said, “Going into the automobile business is an inevitable choice for Samsung’s future.”

Now that the smartphone business is saturated, Samsung is betting on the next-generation automotive sector along with other global tech behemoths such as Apple and Google.

At the end of July, Samsung paid $455 million for a 2 percent stake in China’s leading electronic-vehicle and battery producer BYD, which was intended at boosting its chip business for electric cars.

“The automotive segment is expected to rapidly emerge as a new growth engine for semiconductor and electronic components in the ever-expanding Internet of Things era,” said Lee Seung-woo, an analyst at IBK Investment and Securities. “Given it’s not easy for Samsung to start from scratch in the automotive business, M&As are an ideal strategy to save time.”

A recent series of acquisitions and strategic investments are part of Samsung’s transition to a post-Lee Kun-hee era by his heir-apparent, Samsung Electronics Vice Chairman Lee Jae-yong. He has been at the helm since May 2014, when the chairman had a serious stroke. Previously, Samsung was more inclined to buy companies in its traditional business sectors.

But the tech giant is sitting on $61 billion in cash and the equivalent, and has been offloading some affiliates and assets since 2014.

Samsung has acquired 10 companies globally in the past two years - from the United States to Canada, France and Brazil - and made strategic investments in two start-ups. The fields of businesses range from the Internet of Things to cloud computing, mobile payments, connected cars and artificial intelligence. Companies such as PrinterOn, Joyent, Proximal Data and YESCO Electronics deal with corporate clients instead of individual consumers.