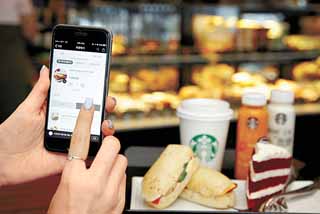 The service, which was available only for made-to-order beverages such as coffee and tea drinks, will now include bottled juice, fresh sandwiches, packaged coffee beans and more. Users will also be able to see how many of the ready-made products are available at nearby coffee shops.

Siren Order, which was implemented in Korea in 2014 for the first time, allows consumers to order beverages through the Starbucks app and retrieve it at the counter of a Starbucks shop. Consumers must be within 2 kilometers (1.24 miles) of the coffee shop to order.

Since the app’s launch, the service has been continuously gaining a following. It has accumulated some 9 million users, 5 million of those were generated solely from January to July of this year. It’s available at Starbucks locations worldwide.

Those who use the app service will also be able to choose how they would like to receive their drinks: in cars or at the coffee shop.

Customers who use Siren Order from Aug. 17 to 30 will receive extra mileage on their app and a coupon for a free drink.