Syring: Thaad will not be used against China

Syring: Thaad will not be used against China 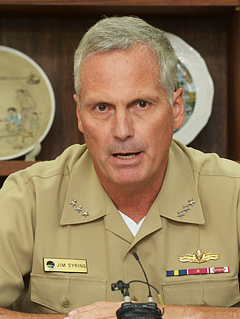 The U.S.-operated missile defense system scheduled to be deployed in South Korea by the end of next year will not be used to keep China in check, said the director of the Missile Defense Agency (MDA) under the U.S. Department of Defense.

Director Vice Adm. James Syring of the MDA stressed during a joint interview with local reporters at the headquarters of the Joint Chiefs of Staff in Seoul on Thursday that the Terminal High Altitude Area Defense system to be set up in Seongju County, North Gyeongsang, some 270 kilometers (168 miles) south of Seoul, is “not designed for China” but for countering threats from North Korea.

“Our missile defense system is not designed for China,” said the flag officer, who has led the MDA since 2012. “Never has been, never will. We are concerned about North Korea in this region.” Syring’s remark was apparently intended to alleviate protests and suspicions from China that the radar missile defense system is in fact a cover for the world’s superpower to monitor its air space activity. In a direct rebuttal to such suspicions, the director emphasized that the United States does not see China as a “threat” but is “concerned about North Korea,” adding that claims that the Thaad was meant for China are “not correct.”

To further emphasize his point, Syring continued by saying that the system “will be solely for the purpose of the defense of the Republic of Korea,” and that the information collected by the Thaad’s powerful X-band radar “will not be shared with Guam or any part of the (U.S.) ballistic missile defense system.”

On the possibility of Thaad deployment in Japan, Syring said, “There are no discussions or any formal dialogue ongoing with the government of Japan on Thaad deployment,” though he called Japan an “important partner” for regional and homeland security.

Since Seoul and Washington announced their decision to set up the Thaad in Seongju on July 8, Beijing has bristled at the move and warned of economic and diplomatic retaliation against Seoul.

As if to display its willingness to put these warnings into action, China cancelled a series of performances of Korean pop stars on the mainland. On the diplomatic front, China scuttled the adoption of a statement by the UN Security Council on Tuesday condemning North Korea’s latest ballistic missile launches last week by insisting that it include a denunciation of the Thaad deployment in South Korea.

On Thaad’s intercepting capabilities, Syring, a graduate of the U.S. Naval Academy with a degree in maritime engineering, said with its proven capability, Thaad “has successfully intercepted targets in 13 of 13 tests” and added that “it employs an interceptor with the hit-to-kill technology that destroys incoming North Korean missiles.”

Syring said the United States has not yet conducted an interception test against intermediate and long-range ballistic missiles (IRBM) such as the North’s Musudan missiles, while tests on short-range and mid-range tests “have been done over a period of years.”

He noted the United States would carry out “longer-range tests” next year to target such medium to long-range missiles.

Asked if the Thaad could still intercept incoming North Korean missiles that were launched at an unusual angle intentionally to evade its interception capability, he expressed confidence in Thaad’s capability to target such missiles coming from such an unusual trajectory.

“The Thaad system is designed to defend against a wide range of trajectories,” said Syring. “Our testing programs over the last decade have tested through those various trajectory regimes. I am confident, given its capability for radar and interception, that it has been thoroughly tested and we will see that capability exhibited.”