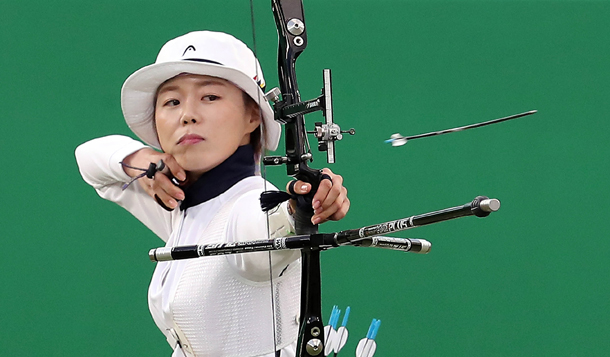 Chang Hye-jin shoots an arrow at the final match against Germany’s Lisa Unruh in the stadium at Sambadrome in Rio de Janeiro on Thursday. Chang’s victory illustrates how Korean women archers dominate the Olympic event. The sport is now the country’s most successful in Games history. [JOINT PRESS CORPS]

On the seventh day of the Olympics in Rio de Janeiro, Brazil, Team Korea added two more medals, one gold and one bronze, taking another stride toward its objective of 10-10 - finishing within the top 10 countries in medal tallies with more than 10 golds.

Once again, it was archery, Korea’s gold mine in the Summer Games, that led the way with Chang Hye-jin capturing a gold medal in women’s individual competition.

Chang, who contributed to the female team’s run to make history earlier in the week by taking an eighth successive Olympic title, brought down Germany’s Lisa Unruh with a set score of 6-2 (27-26, 26-28, 27-26, 28-27) in the final to stand atop the podium by the end of the match.

As the Korean national anthem filled the Sambadrome stadium in Rio de Janeiro, Chang had tears in her eyes. It had been a long and a tough journey for the 29-year-old archer to get to Brazil.

Ranked sixth in the world in recurve, Chang was absent from the London Games and had to watch her compatriots from afar in 2012. She finished fourth during the Olympic team trials and could not get a ticket to London for the Summer Games. “I felt I was not ready,” she said. As her compatriots took gold in the team event as well as in the individual event, Chang swallowed the bitterness of defeat and looked ahead to the Rio Games in 2016.

Despite what some may see as a painful loss, Chang remained confident and optimistic, thinking her time would come sooner or later. She was not wrong. During the grueling national team selection process, Chang was picked along with Ki Bo-bae, the title holder of the individual event from the 2012 London Games, and Choi Mi-sun in April to represent Korea in the 2016 Olympics. She cried her eyes out after the qualifiers. All the emotions from 2012 and the arduous journey leading up to her selection came flooding back.

Then in Rio this summer, Chang stood alongside Ki and Choi when the team competed in the team event Sunday. The trio eventually emerged with gold medals around their necks, continuing the legacy left by their senior archers.

After taking gold in the team event, the trio became rivals as the individual event came around. Ki and Chang eventually met.

Earlier in the day on Thursday, Chang and Ki went head to head in the semifinal. For a moment, Chang’s chances at gold seemed to be slipping, when she shot a devastating three with her second arrow in the first set.

“I didn’t come here expecting to win the individual gold,” she told the Yonhap News Agency after the match. “My mindset was to go out there and enjoy the competition as much as I can. And I did just that and I am satisfied with the result.”

With three golds in archery from this year’s Summer Games alone, the sport is now the country’s most successful Olympic sport, with a total of 22 gold medals.