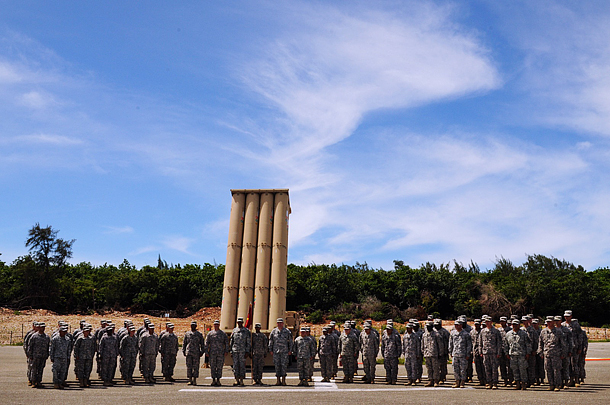 The logic of the people who oppose the U.S. deployment of the Terminal High Altitude Area Defense (Thaad) system in Korea generally shares three loopholes. First, they fail to answer how they can stop a North Korean nuclear missile attack on the South. This is a crucial matter. When North Korean leader Kim Jong-un ordered the firing of a Rodong missile a month ago toward the East Sea after adjusting its range to 600 kilometers, a map of the Korean Peninsula was placed on his desk. If the North adjusted the trajectory of the missile by 80 degrees clockwise, it would have landed on Busan harbor and Gimhae airport. They are key entry points for U.S. reinforcements. If a war takes place between the two Koreas, Kim will fire thousands of rounds of long-range artillery at the capital region and Rodong missiles to the southern entry points for U.S. troops. The Thaad system is meant to defend the country from the Rodong missiles. It was decided to deploy the system not in the capital region, but in the southeastern town of Seongju because of this reason.

Protesters asked why the site was not in the capital region and why it was being deployed to protect U.S. forces, not the Korean people.

That is ridiculous. A missile does not differentiate Koreans and U.S. soldiers. The protesters tend to believe Kim won’t attack the South and the missiles will only be fired toward Japan and the United States. They should have said the North won’t start a nuclear war against the South because it will lead to mutual destruction. Or they should have said we must concentrate our efforts on persuading the North, China and the United States to prevent a nuclear war on the peninsula.

The protesters’ argument is unbelievably romantic or unrealistic. Rather than trying to assess reality, they are filled with delusional hope. If people who are not experts, such as TV entertainer Kim Je-dong, make such arguments, it is acceptable. But when Moon Jae-in, former chairman of the Minjoo Party of Korea, and politicians who may be in charge of national security make such arguments, it is scary.

The second loophole in the protesters’ logic is the worry that the South Korean government angered China. Chung Se-hyun, who worked as unification minister during the Roh Moo-hyun administration, said in an interview with Xinhua News Agency of China that the Thaad system is capable of intercepting the North’s missiles, and also monitor China’s movements with its X-band radar, which has a range of 2,000 kilometers. “When the Thaad system is actually deployed, the strategic cooperative partnership between Korea and China will end,” Chung argued.

He apparently does not know the truth, or he was exaggerating. The radar to be deployed in Korea has an operational range of 900 kilometers and is designed specifically for intercepting the North’s missiles. The 2,000-kilometer-range radar, mentioned by Chung, is not for interception purposes but for an early warning system.

Director Vice Adm. James Syring of the Missile Defense Agency, who visited Korea this week, openly stated that the Thaad system to be deployed in Korea will be in terminal mode and will never be changed to forward-based mode. He appeared to be speaking to the Chinese government.

China and the United States will have a strategic talk in the near future to discuss the Thaad issue. If the two countries straighten out that fact, the protesters will be embarrassed.

The third loophole is the convenient belief that the Korea-U.S. alliance will not be broken even if our government cancels the Thaad. It may not be broken, but U.S. troops will not want to shed blood for the Korean people who sent back the system. If an emergency takes place in Korea after next year, the next U.S. administration may not be able to dispatch reinforcements, who will be exposed to Rodong missile attacks. This is how an alliance can fracture.

Those are the three questions I want to ask protesters of the Thaad in the Minjoo Party. They refuse the Thaad deployment mostly because they loathe the Park Geun-hye administration, because they want to win the next presidential election and because they do not like the United States. We need an umbrella, even if it is a made-in-U.S.A. umbrella.