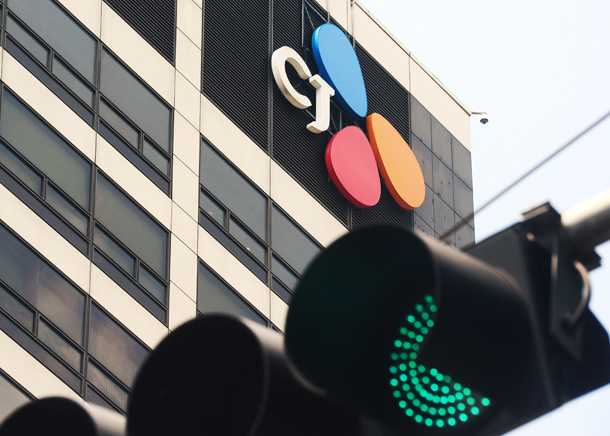 A green traffic signal outside the CJ Group headquarters in Jung District, central Seoul, on Friday, the day its chairman was granted a special pardon. [NEWSIS]

While CJ Group was celebrating the government’s decision Friday to issue a special presidential pardon to its ailing chairman, Lee Jay-hyun, ahead of Liberation Day, other conglomerates with similar hopes of having their top leaders reinstated expressed their disappointment.

“We welcome and appreciate the decision,” CJ Group said in a statement following the announcement. “We understand the decision is meant for us to contribute greatly to the national economy through our business, and we will do our best to leap forward as a global culture corporation.”

In a separate statement, Lee, the only businessman to be pardoned by President Park Geun-hye this year, vowed to recover his health as soon as possible and take “contributing to the nation and society with my business as the last goal of my life.”

The chairman was sentenced to two and a half years in prison and fined 25.2 billion won ($22.2 million) during a retrial in December.

Given that the 56-year-old chairman of the nation’s leading food and entertainment conglomerate needs to be treated for a number of health problems, including the neurological Charcot-Marie-Tooth disease, his immediate return to the helm is deemed impossible. But observers predict that a management vacuum caused by his indictment in 2013 may ease, and major overseas investments and projects that had been pending will be able to move forward.

Business lobbying groups welcomed the pardon. “Given that [the chairman] has been awarded the chance to return to the business scene, we hope he will truthfully fulfill his responsibility in making investments and creating jobs,” said Jeon Su-bong, head of research at the Korea Chamber of Commerce and Industry.

An insider from one of the companies, who asked not to be named, said the number of pardoned people in the business sector was “too little.”

“The government explained the special pardon was meant to revitalize the economy, but the beneficiaries are extremely limited,” he said.

LIG Next1 issued an official statement saying, “It’s a shame to see such a result when the group is poised to launch important overseas export businesses and consistent investments to develop cutting-edge technologies, which all require an owner-manager’s decision.”

Koo Bon-sang, the eldest son of LIG Group Chairman Koo Cha-won, is the largest shareholder of the group, which is engaged in the defense industry. He was arrested in 2012 for manipulating accounting records in order to gain permission from regulators to issue commercial papers worth 189 billion won. Koo is serving a four-year prison term.

Hanwha Group’s Kim sent out a message to employees saying the company wished to proceed with small and big impending business tasks without delay. He completed a jail term for breach of trust but is still under probation, which bars him from returning to official duties.