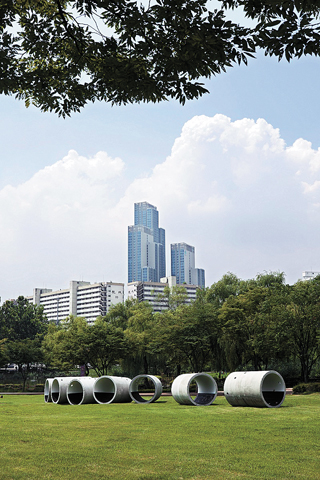 AmorePacific began the fourth edition of its cultural sponsorship program “APMAP (AmorePacific Museum of Art Project) 2016 Yongsan” today at its headquarters in Yongsan District, central Seoul. Intended to support modern artists, the program includes an exhibition inside the headquarters - which is still under construction but almost finished - as well as at the nearby Yongsan Family Park. In the photo is an installation by AnLstudio titled “Return” at the park. The exhibition, under the theme “Make link,” will run from 10 a.m. to 7 p.m. until Sept. 10. [AMOREPACIFIC]