Finding the soul of Korea in old-fashioned oil lamps

Finding the soul of Korea in old-fashioned oil lamps 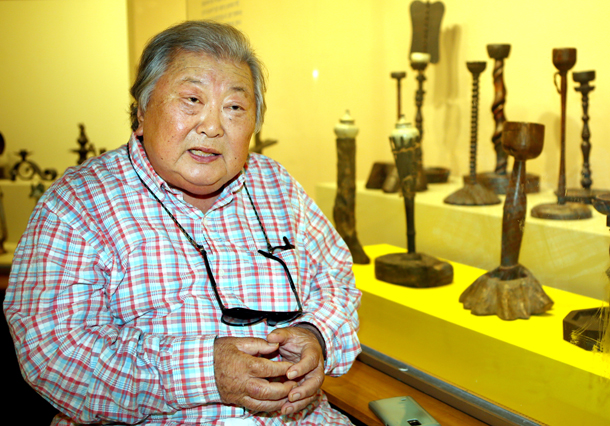 Kim Hyung-koo, director of the Korean Deung-jan Museum, says he plans to publish a book about Korea’s ondol culture next year, which marks the museum’s 20th anniversary. [KIM CHOON-SHIK]

The Korean Deung-jan Museum in Yongin, Gyeonggi, has a unique collection.

Kim Hyung-koo, its 75-year-old director, established the museum 19 years ago after a lifetime collecting oil lamps and their stands with his late father and grandfather.

The exhibition halls on the first and second floors of the museum boast some 400 oil lamps and stands from the Three Kingdoms era (57 BC-668 AD) to the Joseon Dynasty (1392-1863). They are made of all kinds of materials - clay, bronze, white porcelain, steel, brass and even paper - and are in a variety of shapes.

“Oil lamps were Koreans’ long-time companions,” Kim said in an Aug. 4 interview at the museum. “Scholars read books under the lamps and their wives sewed next to them. Children were dreaming about their futures. Irrespective of which social bracket you were from, the lamps lighted Koreans’ nights.”

Oil lamps were particularly beloved in Korea and they varied more than in other parts of the world, Kim said, because Koreans used ondol, the traditional under-the-floor heating system. Koreans did not use chairs.

“People in countries that used chairs only had to place oil lamps on a table,” he said. “Koreans had to adjust the light to the height of their eyes. That propelled the need for stands. Artistic talents from each era worked a lot on oil lamps.”

The oil lamps produced in the Goryeo Dynasty, which was Buddhist, took the shape of Buddhist rosaries or prayer beads, whereas those from Joseon Dynasty, when Confucianism was dominant, mimic bamboo, which symbolized integrity.

“You can get a peek into the wisdom of our ancestors through oil lamps,” he said. “In the late Joseon Dynasty, when inflammable oil was imported, lamps with lids were developed and used widely.”

Three generations of Kims family collected oil lamps, which some people found curious because they don’t get more valuable over time, like porcelains or paintings. But his family wanted to collect things that say something about the soul of Korea.

Kim’s father was an obstetrician who first exhibited his lamp collection on the second floor of his hospital in Suwon in 1969. The junior Kim established the museum in 1997 and transformed it into a foundation in 1999.

In recognition of their contribution to preserve things from the past, Kim’s father won a Presidential Prize in 2004 and he received another in 2013. The museum also runs educational programs such as lamp-making classes for elementary and middle school students.

“Oil lamps helped my family members gather in one spot,” Kim said. “I hope children today could learn such a spirit.”