Gangnam style applies to the look of its police, too

Gangnam style applies to the look of its police, too 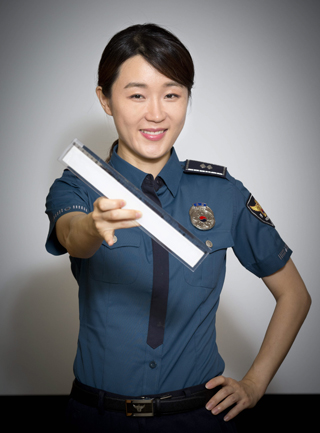 “I want to design and make uniforms that are comfortable and that officers will be proud to wear,” said officer Lee Eun-ju. [LIM HYUN-DONG]

Among her fellow police officers, Lee Eun-ju is known for carrying a ruler.

The 38-year-old officer works in the equipment management department of the Gangnam police precinct in southern Seoul, where she measures her co-workers’ sleeves, giving them advice such as, “you would be more comfortable if you adjust your sleeves about 2 centimeters (0.7 inches).”

Lee is Korea’s first “designer police officer.” Last year, the Korean National Police Agency (KNPA) recruited her when they were hiring people with design skills and it was through this that Lee became a police officer. The police agency started this special recruitment back in 2014 but Lee was the first to be hired.

Lee’s responsibilities include designing and developing police uniforms, shoes, caps, belts and so on. Of course, she also goes on patrol duty and is dispatched to the field just as any other police officer would be.

Before Lee became a police officer in her late 30s, she worked for over 10 years as a designer in reputable fashion companies like Benetton Korea and Shinsegae International. When Lee, who majored in textile crafting at Catholic University of Daegu, was asked why she became a police officer, she simply replied, “I just wanted to help others.”

She added, “Rather than doing what I was doing, I was more satisfied when I was aiding those around me. A friend of mine who was preparing to go to the police academy told me they were hiring a designer. My heart started racing when I saw the word ‘police.’”

Lee was worried whether she would be qualified because of her age and stamina. The physical examination consisted of five categories including a 100-meter sprint, 1 kilometer (0.6 mile) run, sit-ups, push-ups and a grip strength test. While it seemed like a daunting challenge, she thought to herself, “It will be too late if I start tomorrow. I’ll start today.”

Every night after coming home from work, Lee ran about two hours. She also gradually increased the number of push-ups and sit-ups she could do.

After Lee was accepted and attended the police academy for officer education, she achieved the first level in kendo, a Japanese fencing martial arts.

Lee did not mention her goals to her parents, fearing they would oppose the idea, but when she told them she had been accepted into the KNPA, Lee’s parents were “happy and proud of her.”

When Lee started her active duty as a police officer, however, it was not initially easy. She was stationed at a police precinct in Gangnam. During her placement, she had to subdue a drunken person who was armed with a lethal weapon and was also dispatched to a number of crime scenes.

“At first, I was afraid,” admitted Lee. “But wearing the uniform gave me strength and it gave me a strong sense of duty and commitment to protect the people.”

Lee has recently taken an interest in the history of police uniforms and foreign police uniforms. She is also researching new types of materials that could be used in the future.

She added, “I was quite surprised by how many officers around me study legislation and foreign languages to be more helpful to people. I want to do my best to design uniforms that they would find comfortable and be proud to wear.”