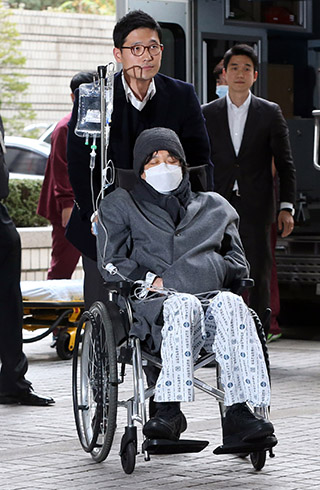 The number of pardons for businessmen was kept to a minimum of 14. President Park Geun-hye said Friday the pardons were for the sake of national unity and economic recovery. Lee was the only high-profile businessman included on the list.

Park convened a Cabinet meeting at the Blue House Friday morning to finalize the list. “Until now, I have exercised the right of special pardons in a limited way in order to seek a public consensus,” Park said. “This time, the decision was based on various opinions on how to accomplish national unity and economic recovery. The measure should allow people facing hardship and micro-business owners maintain hope and return to their jobs quickly.”

Following the cabinet meeting, Minister of Justice Kim Hyun-woong formally announced the special pardons. In addition to the 4,876 criminals, 730 inmates were released on parole and 75 juvenile convicts were released from detention. Probations on 925 convicts were lifted.

In total, more than 1.429 million people got some good news on Friday.

“We included only a certain number of businessmen,” Minister Kim said. “Politicians and public servants convicted of election law violations and corruption were completely excluded as well as those convicted of heinous and inhumane crimes.”

CJ Chairman Lee was pardoned on humanitarian concerns. Expert opinions said he could no longer serve his prison term due to deteriorating health conditions, Kim said. “Giving him an opportunity to contribute to the national economy was also considered,” Kim added.

Last month, Lee dropped an appeal over his tax evasion and embezzlement conviction, citing his poor health. The chairman was sentenced to two and a half years in prison and slapped with a 25.2 billion won ($23 million) fine in December.

Prosecutors did not file appeals, making Lee eligible for the pardon.

Lee has suffered a number of health problems including the neurological Charcot-Marie-Tooth disease and side effects following a kidney transplant in 2013. The disease impairs the patient’s hands, arms, feet and legs as a result of peripheral nerve disease. He is currently being treated at Seoul National University Hospital in central Seoul.

Lee was indicted in 2013 for allegedly evading 50 billion won in taxes and embezzling 70 billion won in company assets. He was found guilty in his first trial in 2014 and in an appeal in December.

While it is customary for Korean presidents to issue special pardons on major national holidays, Park has refrained from exercising that right and has so far granted only two series of pardons. The first came in January 2014 for 5,900 inmates convicted of minor crimes. No high-profile figures were included. The second series was on Aug. 13, 2015. Fourteen businessmen were included, but SK Group Chairman Chey Tae-won was the only tycoon to be released.

No politician has been granted a special pardon during Park’s presidency.

The Federation of Korean Industries issued a statement welcoming Park’s pardons. “The business community will do its best to develop the economy,” it said.