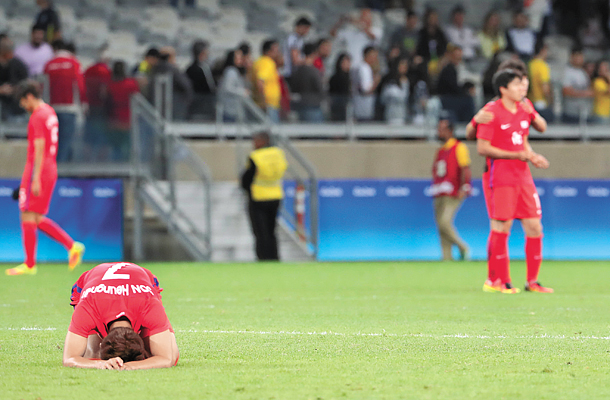 Son Heung-min of Korea is devastated after suffering a painful 1-0 loss to Honduras on Saturday at the Mineirao Stadium in Belo Horizonte, Brazil. The loss killed Korea’s chance for a medal in football at this year’s Games and its hope to match, or even surpass, the performance by the 2012 squad has been dashed along with it. [NEWSIS]

Korea’s football players from 2012 have an Olympic bronze on their shelf to remember the Summer Games in London. Looking at the medal, they can vividly recall their run during the Games, defeating even the host England along the way to the podium. Unlike the 2012 squad, however, this year’s team will be returning home empty handed without any token to commemorate their victory at the Summer Games in Rio de Janeiro, Brazil, as their hope to match or even outperform the 2012 squad to stand somewhere on the podium has been dashed.

“I am sorry for letting the Korean people and my teammates down,” said Son Heung-min of Korea after his team bid farewell to its hopes for a medal with a devastating 1-0 loss to Honduras on Saturday at the Mineirao Stadium in Belo Horizonte, Brazil. “Everyone played so hard but the result was disappointing. I am very sorry for disappointing my seniors, coaching staff, my teammates and people back home who cheered for us.”

Korea’s loss against Honduras, which was eliminated in the quarterfinals during the 2012 Games, was not anticipated by fans and the media around the world. Before the game, The Roar, an Australian sports website, predicted that “South Korea’s class will be too much for valiant Honduras,” and that Korea would prevail over Honduras 2-0.

The loss, however, did not come out of lack of trying. 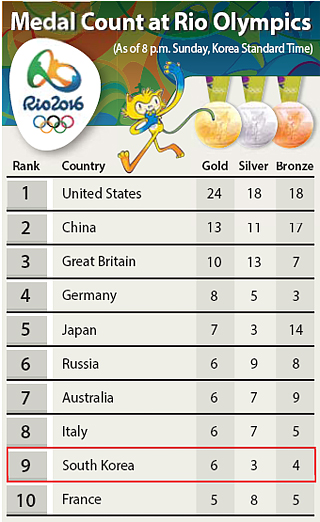 Korea had a number of clear-cut opportunities to net the ball, taking 16 shots throughout the match, seven of which were right on target but were rejected by the Honduras goalkeeper Luis Lopez, who seemed to be having the game of his life.

Throughout the 90-minute game, the Korean side had possession of the ball 64 percent of the time.

One of the highlights of the game came in the 38th minute, when Son drilled a free kick from the midfield just outside the box. But Lopez predicted the trajectory of the shot and deflected the ball with his right hand.

While Lopez singlehandedly nixed all of Korea’s scoring attempts, Alberth Elis of Honduras did not miss the one scoring chance given to the Central American team in the match.

In the 59th minute of the match, the Honduras offensive lineup exploited the turnover committed by Son and rushed the Korean side of the pitch. In the span of less than a minute, Honduras penetrated to the penalty box and Elis scored the lone goal of the game past Korean goalie Gu Sung-yun.

After the match, Son rushed to the referee and protested that the injury time given was too short, given that Honduras players intentionally killed time towards the end of regulations. But the whistle has been blown and there was no going back. Realizing this, Son fell to the ground, unable to control his emotions, and remained there for over 10 minutes.

“I didn’t want to let go of the hope,” Son said. “But it was the decision by the official so there is nothing I can say.”

Son, a wild card and one of the elders of the team, said he could not face his teammates in the locker room after the game, and said the blame is on him to have missed all the shots during the game.

“These young players came all the way to Brazil and played hard,” he said, “and I ask the fans back home to not condemn them.”

Despite the early elimination, however, Shin Tae-yong, the manager of the squad, said he was able to witness a glimpse of hope for the future of Korean football.

“I’m proud of our players for giving a great performance even though they were seen as the weakest generation in South Korean Olympic football history,” Shin said at the post-match press conference, according to Yonhap News Agency. “If we can keep up the good work, I think the future of South Korean football is bright.”