Park Sang-young reflects on the power of being positive

Park Sang-young reflects on the power of being positive 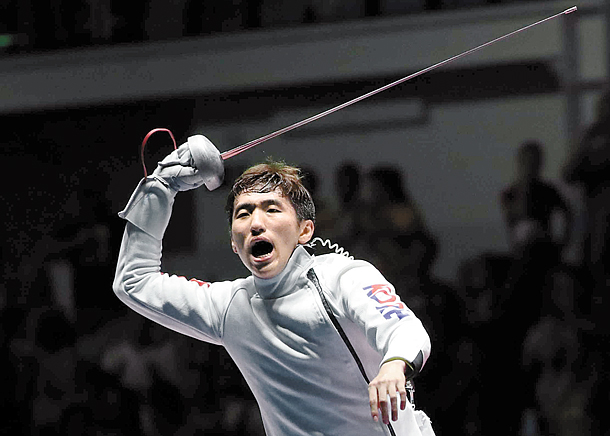 Park Sang-young of Korea celebrates after taking down Hungary’s Geza Imre in the gold medal match for the men’s individual epee fencing on Tuesday in Rio de Janeiro, Brazil. [NEWSIS]

No one thought Park Sang-young was a possible contender for gold at this year’s Olympics. Even those who knew him said they were skeptical about his chances given that he just came out of an injury that kept him out of the piste for almost a year. For those who were unfamiliar with the fencer, his rank as No. 21 in the world was enough to exclude him in their minds from the list for possible gold medalists. But against all odds, Park prevailed and became the first epee fencer in Korea to take home a gold medal from the Olympics.

During the gold medal match of the men’s individual epee last Tuesday at Carioca Arena 3, Rio de Janeiro, Brazil, Park faced Hungary’s Geza Imre, who stands as No. 3 in the world. By the end of the second set, Park was behind Imre 9-13 with only two points to concede before the Hungarian took the gold. Even though Park’s chances seemed incredibly slim, he didn’t give in and indeed he was filmed repeatedly murmuring to himself “I can do this.”

After Park defeated Imre in a dramatic comeback, the video of Park murmuring the phrase went viral.

“I received over 1,500 messages through social media,” said Park when the JoongAng Ilbo sat down for an interview with him after his historic victory. “I read about 400 of them before I went to bed and when I woke up, the number of messages in my inbox had more than doubled. The message that I was touched by the most was by a student who said he was preparing for his college entrance exam and he got the strength to endure from my match.”

After the historic victory, Park said his phone was vibrating and beeping all night long with congratulatory messages. But despite the messages and the medal he now has to help him remember the moment, Park says it still feels unreal.

“It hasn’t hit me yet,” he said. “I think it will feel more real when I return home.”

When asked about murmuring the phrase, he said it just came out of his mouth unconsciously. “I didn’t even know I was murmuring something. Interestingly, I started to see some weak spots in my opponent afterwards.”

Park said he changed his tactic shortly after the third set started, and this threw off Imre.

“Once the score was 10-14, I thought he would try to finish the match as quickly as possible. So, in return, I slowed down my attacks and Imre started to react just as I expected.”

The match demonstrated the power of optimism, Park said.

“When I first joined the national team,” he recalled, “I was not that experienced and made mistakes frequently. After a match, one of the senior fencers from the team told me that chances come around when I don’t give up.”

He added, “Among the athletes, because there are so many variables and things that can go wrong, we have a saying that an Olympic medal is a gift from God. In a situation like mine during the final match, it felt like as if God really did respond and gave me that medal, even though I don’t really believe in a particular religion.”

Indeed, his victory was almost a miracle considering he suffered from a torn ACL last year and went into the final match with a cramp in his leg. “I was exhausted but what was weird was that when I stood on the piste, my leg and knee felt fine.”

At just 20 years of age, Park had tasted the sweetness of success while still young. But for him, his medal is not a token of success but a symbol of growth.

“Someone told me that a medal could earn me attention but this would only last about a month,” Park said. “He also told me that the medal would return in four years as a burden of all the expectations I have to live up to. I think I would prefer to look at this as a sign of growth rather than success. A success may end in failure, but there is no end to growth.”