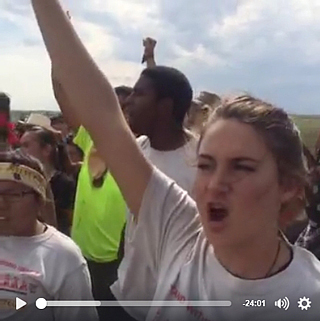 The Bismarck Tribune reported that the star of the “Divergent” movie series joined more than 200 protesters Thursday at a “spirit camp” established by the Standing Rock Sioux at the confluence of the Cannonball and Missouri rivers.

The pipeline would start in North Dakota and pass through South Dakota and Iowa before ending in Illinois. Construction of the pipeline began this week just north of the Standing Rock Sioux reservation.

Authorities say a dozen protesters were arrested Thursday evening were for disorderly conduct or criminal trespass. Woodley was not among those arrested.

Opponents of the $3.8 billion Midwest oil pipeline are vowing to keep up the pressure after last week’s arrests.

Tribal members say the pipeline would disturb sacred sites and could affect drinking water on the reservation and for people downstream.

The four-state pipeline’s path in North Dakota would cross beneath the Little Missouri River once and the Missouri River twice. The company said the pipeline would include safeguards such as leak detection equipment.