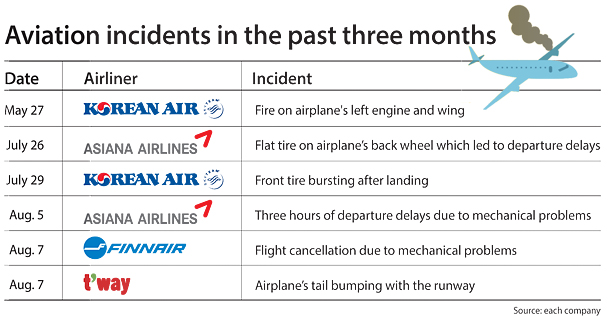 Shin Hyun-kang, a 30-year-old IT worker, was on a summer holiday trip to Macau last month when the airplane he was flying in started severely shaking mid-flight.

“Thoughts spun around in my head about whether the sound and trembling was because I was flying on a low-cost carrier or because there was a problem with the airplane,” he said.

As Shin knew an acquaintance who suffered from an actual airplane accident, his concerns piled up. “I think hearing all the news about aviation incidents and not actually knowing much about airplanes freaks people out,” he said.

Everything turned out to be fine (it was just some turbulence), but a recent spate of aviation incidents reported in the media has many travelers spooked as they board their flights during the busy vacation season.

While the term aviation “accident” is defined by the International Civil Aviation Organization as a situation involving the fatal or serious injury of a person or damage or structural failure in the aircraft, an aviation “incident” is defined as a problem that affects or could affect the safety of an airplane’s operation.

There have not been accidents that resulted in passenger injuries or casualties recently in Korea, but a series of aviation incidents have been enough to concern customers.

The latest in a string of incidents includes a Boeing 737-800 operated by low-cost carrier T’way Air flying from Osaka, Japan, to Incheon International Airport. The airplane’s tail touched the runway’s surface while attempting to land, and the plane had to perform a go-around in the air after failing to land on its first try.

The Ministry of Land, Infrastructure and Transport categorized the case as a “serious incident” and began inspecting the safety of the aircraft.

In Korea, a serious incident is defined as a problem that could have resulted in an accident but did not.

“An airplane’s tail touching the runway while landing could happen because of various factors such as pilot error or wind conditions,” a ministry spokesperson said. “We are still investigating possible damage in the airplane through the incident.”

Some airliners have delayed their flights due to mechanical problems. Finnair was scheduled to take 297 passengers to Helsinki, the capital of Finland, on Sunday but then canceled its flight due to mechanical problems. Replacement tickets were issued, but some 26 people were left at Incheon International Airport because of miscommunication between their travel agency and the airliner, resulting in a fuss.

Several more severe cases of blown-out airplane wheel tires took place last month. On July 26, an Asiana Airlines plane was spotted with a flat tire in its back wheel as it was about to depart Da Nang International Airport in Vietnam. The Incheon-bound flight was delayed over 18 hours. Three days later, two front wheels on a Korean Air jet burst after landing at Jeju International Airport from Narita, Japan.

“It’s true airliners must take extra care since these incidents could possibly lead to fatal accidents. However, it is impossible in some cases to get rid of all possible factors leading to accidents such as sharp particles flying in,” said Jung Yun-sik, an aeronautical science professor at Kyungwoon University.

“Customers should note that all airliners, including low-cost carriers, are flying under tight guidelines by the International Civil Aviation Organization, and those below standards cannot be authorized to fly.”

“There are set guidelines by aircraft manufacturers for airplane maintenance, and we are running check-ups and parts changes on tighter guidelines than given,” a Korean Air spokesperson said Friday.