When hacking is good: apps for public service

When hacking is good: apps for public service 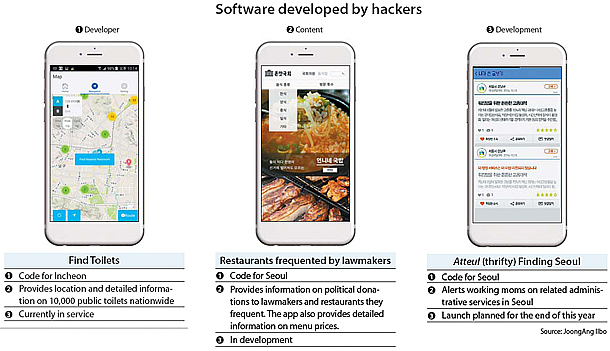 Yoo Ho-gyun, 24, had trouble every time he went out because there are limited numbers of public toilets in Songdo, Incheon, and the ones that are in public buildings are usually locked, available only for store owners and their customers.

Yoo, a computer engineering student college student, decided to solve this problem on his own. Using Google’s map data and computer coding he created an app for Android OS smartphones called “Find Toilets,” and provided it for free.

The app shows 10,000 public toilets in Songdo as well as nationwide. It also comes with a review on the cleanliness of the facilities.

Last year there were a lot of rumors over hospitals affected by Middle East Respiratory Syndrome circulating both online and offline, worsening fears about the contagious disease that swept across the country.

However, MERS Map, an app that mapped out hospitals that suspected MERS patients visited based on the government’s announcement, helped drum down the fears. In just a week after its release, more than 5 million users downloaded the app. This app was not developed by the government but a private company that was provided it for free.

The toilet and the MERS maps apps are just two of the “civic hacking” movements where the private sector provided social services using digital technologies. Creators of the apps and related websites have been dubbed civic hackers.

Civic hackers are different from past civic protesters in that instead of complaining about their disappointment with the government they try to innovatively solve problems using tools such as apps, Catherine Bracy, director of community organizing for Code for America, said during a TED forum in 2014.

Young people in their 20s and 30s, who are more accustomed to IT technologies than their parents’ generations, participate in civic hackings in two forms.

Such is the popular Seoul Bus app that was developed in 2009 by then-high school student Yoo Joo-wan.

The app allows users to find bus stations, bus routes as well as the location of vehicles on the routes. Currently, more than 10 million people use the app, which Kakao acquired in 2014 and rebranded as Kakao Bus in April this year.

Civil hacking also occurs when a group of people with the same interests work jointly on solving a problem.

There are several civil hacking communities with “code” attached to it such as Code for Seoul and Code for Incheon where everyone from high school students to college professors participate.

“As [computer] coding has become widespread, the number of young people who are wanting to participate in public interest projects applying software skills have been increasing,” said Lee Joong-seek, a convergence science and technology professor at Seoul National University, who also led Code for Gwanak last year.

Code for Incheon, which tries to solve problems in Songdo, meets every Wednesday.

The members initially were part of the Code for Seoul that was formed in 2014 but spun off last year as they wanted to focus more on their own neighborhood’s problems. Yoon, creator of the toilet app, is a co-leader of the Incheon civic hackers.

At a recent meeting of Code for Incheon, members created a digital alarm map using Google Maps to alert Incheon residents about places they need to avoid because of strong stenches.

“In Songdo because of the industrial waste coming from the Namdong Industrial Complex, the stench is really bad and you need to cover your nose to pass by,” said Han In-seon, 33, a hagwon tutor.

Code for Seoul is developing an app that shows restaurants and cafes most frequented by lawmakers.

The app was developed based on 2014 data on lawmakers’ political spending.

The app showed that Gasiri, a Korean restaurant in Yeouido, was the restaurant most visited by lawmakers, where the most expensive item on the menu is 80,000 won.

“We wanted to know how political donations were spent for what purposes,” said Cho Yong-hyun, who helped create the app. “We didn’t have [the anticorruption legislation] Kim Young-ran Act in mind when we started it but it is similar to the intention of the Kim Young-ran Act, which is to monitor the activities of lawmakers.”

Oh Si-young, a member of Code for Incheon, said hacking often gets a bad rap.

“There are negative images of criminal acts like stealing other people’s sensitive information,” Oh said. “But hacking is [actually] contributing the development of society by quickly applying technology.”

“Civic hacking is a new form of activity that desires social values based on networking,” said Yee Jae-yeol, a social science professor at Seoul National University. “One can see it as a new form of lifestyle centered on young generations in a time of information sharing rather than a strong sense of moral obligation or responsibility.”

Information and data used to be exclusively held by major portal companies like Naver and Daum, said Lee Joon-hwan, a communications professor at Seoul National. “But today as there are numerous public data that people can utilize, civic hacking will become more widespread and more active.”