Lee discusses the future of Saenuri

Lee discusses the future of Saenuri 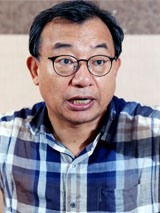 The Saenuri Party’s presidential primary will be opened to all contenders, even those outside party, its newly elected chairman said, promising he would focus on preparing for the 2017 presidential race.

Lee Jung-hyun, a three-term lawmaker representing Suncheon, South Jeolla and a close ally of President Park Geun-hye, was elected last week as the chairman of the Saenuri Party. As the new chairman, he will oversee the conservative party, deeply split with a rivalry between Park loyalists and her adversaries, for the months leading up to the December 2017 presidential election.

In his interview with the JoongAng Ilbo on Saturday, Lee talked about his vision for the campaign and plans to restore public confidence in the legislature and end the years-old factional split of the ruling party. It was his first interview after becoming the chairman.

“You don’t win an election by having a goal,” he said. “The voters will make decisions based on their evaluations toward the current administration. That is why I said the top priority is the current administration’s success. The Saenuri Party was united in bringing about Park’s victory and it became the ruling party. The government and the ruling party share responsibilities. Park still has one year and six months left in her five-year presidential term. Only when this administration’s performance is positively evaluated can we create a strong foundation for winning the next presidential election. Therefore, the best resolution to support the next presidential candidate is supporting this administration to succeed.”

“All contenders, about six or seven currently being talked about, must run,” he said. “If those outside the party want to make bids, they should join our party. We won’t just open up the primary to everyone, but we will also recruit strong candidates. And we will make them compete fiercely for three to five months. And then public opinion polls will take place to drop one candidate every week, narrowing down the top contenders, just like Superstar K [a popular TV audition program for singers]. The last two or three will have the final match at the National Convention.”

He added, “This is the type of fierce open audition that fits our time. Not only the candidate, but also presidential pledges should be created through fierce debates. I will make sure that the voters understand the pledges.”

Lee also denied speculations that his election as the chairman will put UN Secretary General Ban Ki-moon in an advantageous position in the presidential race against other contenders of the Saenuri Party, should he decide to run.

“That is not my intention at all,” Lee said. “I don’t know flaws and qualifications of any contender. There is no one I have in my mind.”

Lee also said the debates of the presidential contenders will include the constitutional amendment issue, admitting that there is a need to introduce a new governing system.

“In 1987, the people accepted the five-year, single-term presidency to introduce a direct election,” Lee said. “After democratization, it should have been changed to the [American-style] four-year presidency with a possibility of reelection. But the politicians who demanded the change actually dropped the issue after they became president. That is why we have done nothing but talk about it for nearly 30 years.”

Lee said he is a supporter of the American-style presidential system. He also said the Board of Audit and Inspection should become an arm of the National Assembly when the constitutional amendment is made.

“We will see many strong demands from the interest groups when we amend the constitution,” he said. “That is why presidential candidates must make public their revision plans and make them an official pledge.”

The new chairman of the largest political party with 129 lawmakers said he despises the authoritarian attitude of some politicians.

“That’s what the people hate the most,” he said. “I hate suddenly receiving completely different treatment just because I am the chairman, as if it is such a high position.”

Lee also went on to say that the special reform committees of the National Assembly are not enough to shatter such authoritarianism among politicians.

When asked about the rivalry between Park loyalists and her adversaries, which has divided the ruling party for nearly a decade, Lee said he will not actively meddle in the conflict. He also said that he will embrace anyone with talent regardless of their faction.

“Even if they are underdogs, I will embrace them if the party needs them,” he said. “It is also wrong to try to avoid hiring talented people just because they are mainstream Park loyalists.”

Reflecting on his political career, he said, “I have never thought about giving up politics. I first made up my mind to become a lawmaker when I saw an election stumping when I was a third grader. After reading the biographies of Kim Koo and John F. Kennedy, I went up a mountain and practiced my speech in front of cattle. My determination was so strong that I never thought about giving it up.”

He said he feels sorry to his family - his wife, son and daughter - because his life has been so fully occupied by politics.

“I cannot talk about my role as a father and I don’t talk about them,” he said, “because I cannot do so without choking with emotion.”

Lee also talked about his 31-years of political life and how he entered politics by working as a secretary for Rep. Koo Yong-sang of the Democratic Justice Party and steadily climbed up the ladder of the Saenuri Party. Asked if a presidential bid is his next step, Lee did not give a definite answer.

“I have accomplished all my worldly goals. Becoming party chairman is something you can achieve if you try, but you cannot become a president just with your determination,” he said. “I never entered politics to hold a position. If I can represent the underdogs and the common people, and if they can live happier lives, then I can say I accomplished all my political goals.”