‘Demon’ market is a hit with foreigners

‘Demon’ market is a hit with foreigners 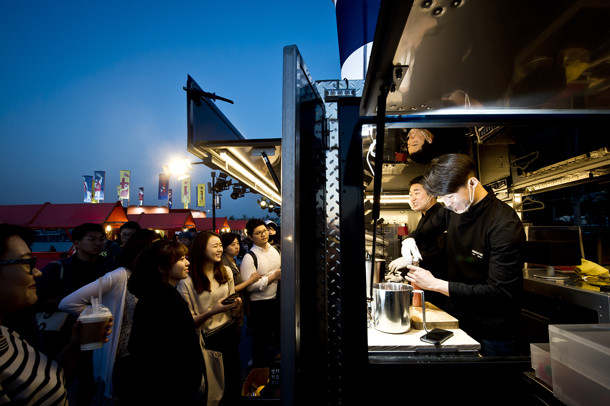 The “Night Demon” market, held at Yeouido Hangang Park every Friday and Saturday night, has been named the Seoul city government’s most popular initiative by foreigners in Korea. Of 1,173 foreigners surveyed, 253 votes went for the weekly market at the Han River, followed by the online civil complaint center Eungdapso with 239 votes. [KIM GYEONG-ROK]

Every Friday and Saturday night a corner of Yeouido Hangang Park comes alive with exotic smells and vibrant flashes of color as vendors sell foods and performers put on shows from around the world at the “Night Demon” market, the city government’s most popular initiative with foreigner residents.

This is according to a survey by the Citizens’ Ombudsman Commission of 1,173 foreigners, 167 of whom currently live in Korea. The night market ranked highest with 253 votes, followed by the online civil complaint center Eungdapso with 239 votes and the overpass-park Seoul Station 7017 Project with 215 votes, the city government announced Friday.

For 10 days from July 26, foreigners were given 30 policies to choose from, which also included an urban housing policy for young adults, an internship program for foreign students, the city’s foreign resident committee and community centers that visit residents’ homes to provide counseling services. All the policies were explained in English, simplified and traditional Chinese, Japanese, French and Spanish.

Now that the survey has been completed and its results have been announced, the city government will be awarding small souvenirs to 200 participants of the survey by the end of August.

It added, “Japanese-language users chose the Visiting Community Center as their favorite.”

“With the survey results from foreigners,” said Seo Jeong-hyup, director general of the Citizens’ Ombudsman Commission, “the city government will be able to provide more online content about the policies people are interested in.”

The Citizens’ Ombudsman Commission said it did not ask respondents to say why certain policies were their favorites but Kim Ran-hee, an official of the commission, said, “We intend to ask them in next year’s or subsequent surveys.”

The Seoul Bamdokkaebi Night Market is situated along the Han River in Yeouido Hangang Park and is open every Friday and Saturday night from 6 p.m. to 11 p.m. The market’s name literally means “night demon,” because it comes at night and disappears by morning.

Eungdapso, the city’s online civil compliant center, was established in 2014 and essentially combined 31 individual civil complaint centers in Seoul into one online center where residents can file complaints, review the process and receive answers within five days all merely by accessing the website, http://eungdapso.seoul.go.kr.

“This result was actually quite surprising,” Kim said, “we didn’t expect Eungdapso to be this popular with the foreign residents.”

The civil complaint center also accepts suggestions from foreign residents of Seoul, who can file them via the “Email to Mayor” function on the city government’s English website, although it may take a week or so to receive an answer because all messages and their replies must be carefully translated.

“I’ve received suggestions this way from foreign residents,” Kim said. “They were mostly about certain advertisements they want to make on the city hall website, or requesting certain changes to policies regarding foreign residents.”

The third most popular initiative, Seoul Station 7017 Project, is an ongoing effort to transform the overpass above Seoul Station into a pedestrian park. The project, inspired by New York’s High Line, was dubbed 7017 because the overpass was created in 1970 and its transformation will be completed by 2017.

The project has been largely opposed by shopkeepers in the area who fear gentrification and the rise in rents that may follow, but it has been well-received by others who look forward to seeing a splash of green in the heart of Seoul.