An, son of two Olympic medalists, fails to maintain legacy

An, son of two Olympic medalists, fails to maintain legacy 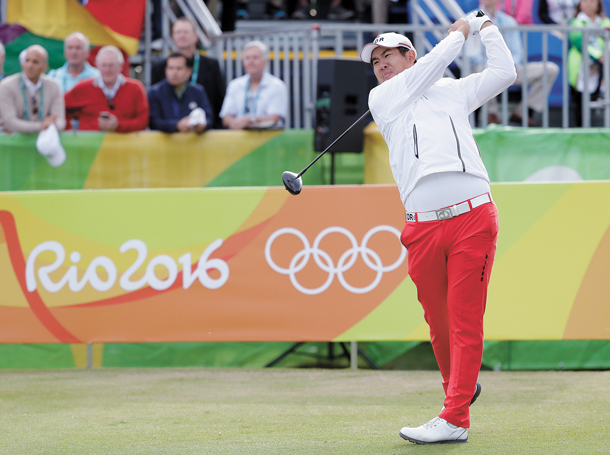 An Byeong-hun tees off in the men’s golf tournament during the Rio Olympics at Rio de Janeiro, Brazil. An finished the event tied at 11th. [AP/NEWSIS]

At this year’s Olympics, in which golf has returned as an official medal event for the first time in 112 years, Korean golfer An Byeong-hun finished tied at 11th after going 3-under 68 during the final round on Sunday for a total of 6-under 278. Despite two eagles on the last day of the event, An was unable to narrow the deficit between himself and the tournament’s leaders.

An, whose parents are Olympic medalists from the 1988 Seoul Games, received much attention even before the tournament. While his father, An Jae-hyung, is a table tennis player who won bronze in men’s doubles at the Seoul Olympics, his mother, Jiao Zhimin of China, claimed silver and a bronze in women’s doubles and singles the same year.

For this reason, fans wondered if he could continue the legacy and become an Olympic medalist himself. An, the 2015 European Tour Rookie of the Year, even hinted at his desire for gold, a color that eluded both his parents.

An had the honor to tee off before any others during this year’s Games because of his Olympic heritage. He was assigned to the first group along with Adilson da Silva of Brazil and Graham DeLaet of Canada. According to the International Golf Federation, da Silva was included in the first group because he represented Brazil, the host nation, while DeLaet was in the first group since Canada was the defending champion after George Lyon claimed gold during the 1904 Summer Games before the sport was eliminated.

Six strokes behind third place, An hoped to narrow the deficit as much as possible during the day. But he did not start the day so well. His tee shot landed in a bunker, but he salvaged himself with his second shot. Landing the ball about two meters (6.5 feet) from the pin with his third shot, he had a perfect opportunity to record a birdie but his birdie putt missed the hole and he ended with a par, only to take a bogey at the next hole. Although he managed to eagle the par-5 fifth hole, he had another bogey at the sixth hole. Throughout the day, he had three more bogeys, and with four total, his chance at an Olympic medal dissipated.

“I was disappointed to not earn any medal,” said An. “I think I missed too many putts.”

Wang Jeung-hun, An’s teammate, finished the day 4-under 67 to tie at 43rd overall with a 2-over 286 score. “I learned a lot from the Games,” he said. “I think this will be a stepping stone for me to become a better golfer.”

“It was not easy to figure out the penchants and play style of my players,” said Choi Kyung-ju, the head coach of the men’s team. “I think expectations for medals put a huge amount of pressure on them.”

Justin Rose of Great Britain became the first golfer to claim Olympic gold in a century while Henrik Stenson of Sweden, the winner of this year’s The Open Championship, took home silver. Matt Kuchar of the United States also stood on the podium with bronze. After the Games, some of these golfers saw a slight increase in their world rankings. Stenson, who was ranked fifth in the world, climbed up a step to rank fourth in the world while bringing Rory McIlroy down to fifth. Kuchar went from 20th to 15th.

With the men’s team coming up short in their quest for a medal, Team Korea now looks to the women’s golf team, whose tournament starts at 7:30 a.m. on Wednesday in Rio de Janeiro, Brazil.