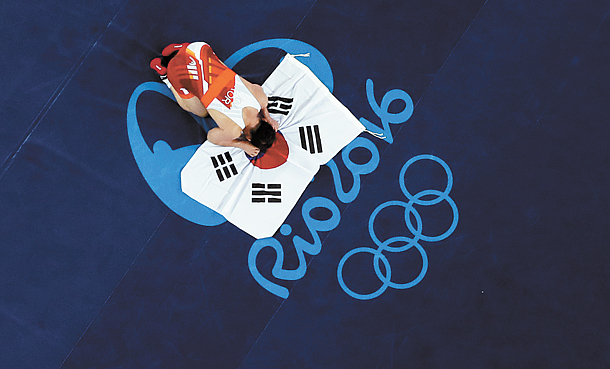 Korean wrestler Kim Hyeon-woo is on the floor after winning bronze medal on Sunday in Rio. Despite taking bronze, Kim was left devasted as he saw a chance for gold slip out of his hands due to a questionable call earlier in the day. [AP/NEWSIS]

The Olympics is once again facing an officiating controversy surrounding Korean wrestler Kim Hyeon-woo, the central victim of the scandal whose shot at the Olympic gold was shattered, but who nevertheless came out of this years’ Games with bronze around his neck.

Kim, who lost to Russia’s Roman Vlaslov during the round of 16 in men’s Greco-Roman wrestling, edged Bozo Starcevic of Croatia 6-4 for bronze in the 75-kilogram (165-pound) category at Carioca Arena 2 in Rio de Janeiro, Brazil, on Sunday.

Resuscitating his chances at an Olympic medal in the repechage stage, Kim suffered a dislocated shoulder during his bout against the Croatian. Despite this, when the match was even at 4-4, Kim fought through the pain and threw Starcevic to earn two points and emerge with a win over his opponent.

After Kim won the bout to seal bronze, the 27-year-old wrestler fell on the mat and sobbed, trembling with emotion. The winner of the 66-kilogram category during the 2012 London Games now had another medal around his neck. But this was not the color he had his heart set on and certainly not the color he could have worn were it not for the officiating dispute that took place earlier in the day. 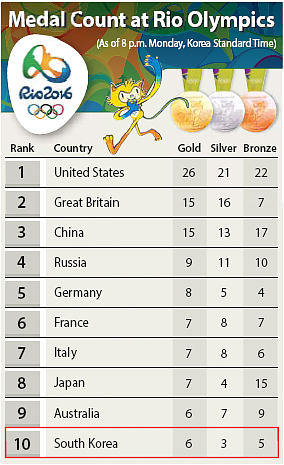 The round of 16 match between Kim and Vlaslov was a rare Olympic event as it pitted two gold medalists from the 2012 London Games against each other, with Vlaslov being the winner of the 74-kilogram division from the 2012 Olympics.

During the match, Kim was down 6-3 with time running out. In a desperate attempt, Kim executed a back arch throw, wrapping his arms around Vlaslov’s waist and pulling him off the mat and back nearly over his head, a move that typically earns a wrestler four points.

But the referee only gave Kim two points. An Han-bong, Kim’s coach, challenged the decision but the ruling was not overturned and as a result of the challenge, Vlaslov was awarded an extra point, ending the match and resulting in an uproar of furious booing from the crowd.

After the match, An and the team considered making an official appeal to United World Wrestling but decided against it since it would not change the outcome of the match.

“I thought about nothing but gold for the past four years,” said Kim after the bronze medal match, “but I am still glad to have won bronze, at least. But I am sorry for disappointing people in Korea who have cheered for me.”

When asked about why he fell to the ground and wept immediately after the match, Kim said, “I think the disappointment of not getting gold despite four years of training just overwhelmed me.”

He added, “I know it is the Independence Day in Korea and I wanted people back home to see me running around the match with a Korean flag… I tried not to lose my focus and tried to think of every match as if it was the final one.”

About moving up in weight class from the 66-kilogram division to the 75-kilogram division, he said, “I knew I lacked the physical strength so I prepared myself with different tactics. Now I just want to rest a bit.”