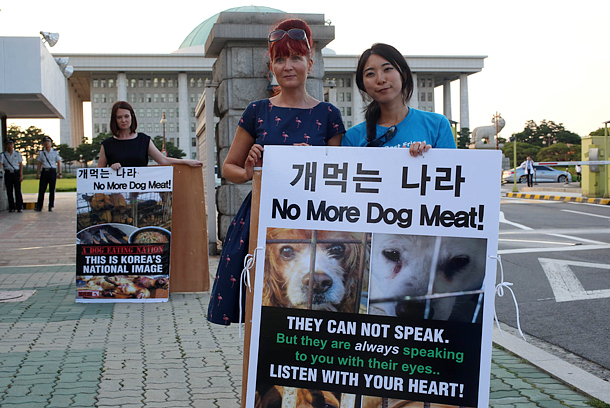 Animal protection activists from the United Kingdom, the United States and Japan picket to urge Koreans not to eat dog meat in front of the National Assembly in Yeouido, Seoul, on July 15, 2015. [KIM KYUNG-BIN]

A few weeks ago, two British animal rights activists came to Gwanghwamun to protest the practice of eating dogs. It made the news — as seemingly any protest down there does — and thus, they can judge their mission to have at least been a partial success.

Though I do agree that the manner in which dogs are killed for meat is wrong and should be replaced with something more humane, I do not believe there can be any logical reason why one type of non-endangered animal deserves protected status while others do not.

One may consider every dog to be “man’s best friend,” a pet, or a creature of superior moral value due to such traits as loyalty, but it seems a little arrogant to me to expect the whole of humanity to concur and also accept the non-consumption of dog meat as a hard moral standard. And while the protestors themselves are vegetarian, there are many who, finding it strange or disgusting to eat such an animal, will consider a person like Korea’s gold-medal winning archer (and apparent dog meat lover) Ki Bo-bae a barbarian whilst happily munching on cows, pigs, and chickens — which also suffer for the benefit of our taste buds.

Many people feel horses are noble friends of ours too, but the eating of them (everywhere from France to Jeju Island) is a far less controversial matter. To many Hindus, the cow is not just a friend but in fact sacred; no Hindu ever asked me to stop eating a hamburger, though. I’ve known Jewish and Muslim friends who wouldn’t eat pork, not because of any perceived superiority in the animal hierarchy this time, but rather out of the religious belief that pigs are unclean. Again, no Jew or Muslim ever told me I was a bad person for eating a pork chop.

As I said, I do believe the way dogs are killed for their meat is wrong. Should we not consider that, though, as part of our broader tendency to mistreat animals? If you eat chicken, you’re also highly likely to be an indirect participant in animal cruelty. Dogs may be cuter and more loyal than chickens, but I have no doubt that they both feel pain. Why not change the way both are treated?

Feeling this way, I should probably just become a vegetarian. In fact, I have tried in the past, and failed. Frankly, I love the taste of meat, and there is also a lot of social pressure to eat it. I eat far less red meat than I used to, but going the whole hog (or rather, foregoing it) still seems beyond me, because I’m weak. My aim now is to continue reducing my meat consumption over time, making it into an occasional treat rather than an everyday thing.

Every generation discovers that certain ideas and practices are morally incorrect. Actions that were considered normal, natural, and even laudable throughout human history suddenly become contested, then debated, and then found unacceptable.

If you were to ask me to list my predictions for what current practices will be anathema a hundred years from now, I would put the killing of animals for food at the top of the list. I would also guess — and hope — that the idea of laboratory-produced meat will go from “ugh” to mainstream much sooner than that.

So in sum, I’m a weak, hypocritical person. By contrast, the Gwanghwamun protestors are living up to their values, and I would probably agree with most of what they say — whilst respectfully disagreeing with this particular protest. I have much less appreciation for a petition set up to push the British government to officially “urge the South Korean government” to ban dog meat. The petition doesn’t even mention the manner in which the dogs are killed; it simply treats the incorrectness of the general practice as self-evident and a matter for British government involvement.

If I make a critical remark about, for instance, a particular political party or media organization in Korea, there will always be someone who will take it as an attack on Korea from Britain. They aren’t upset when a Korean person says it, but they are when a foreigner does. Emotionally I get this, but logically, I don’t; and anyway, I don’t represent anyone other than myself. But when a government itself says, ‘“We urge you to stop engaging in the unacceptable practice of XYZ,” it is obviously different. In that case, it actually is criticism of one country by another, and carries a strong whiff of “We know better than you.”

Now the petition has over 100,000 signatories and Parliament is obliged to debate it. This will happen on September 12th. I hope the U.K.

government does not end up raising the matter with the Korean government, and if it does, I would forgive Korea for condemning something in response, such as, oh, I don’t know, Oxy Reckitt Benckiser, or the global tax evasion and money-laundering that is facilitated in the City of London.


*The author is co-founder and chief curator of Radish Fiction and author of “Korea: The Impossible Country” and “North Korea Confidential.” Twitter: @danielrtudor