Who is your mind’s master?

Who is your mind’s master? 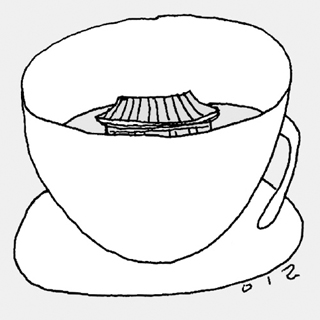 Korea JoongAng Daily will run a religious series entitled “Journey to awaken Christ and Buddha within us” every Tuesday in its opinion pages starting August 16 in an effort to enrich our minds and soul through a plethora of illustrative anecdotes related to the two great religious leaders. -Editor.


The great Chinese Zen Master Linchi was teaching his disciples one day when a young monk asked him, “Master! What is the true Buddha-Dharma?”

Linchi slapped the young monk’s cheek with a whack and pushed him so hard that he fell over. Dumbstruck, his face changing from red to pale, the young monk stared up in wonder at the Zen Master.

Another monk who was there are the time chastised the young disciple, “You’ve just heard a great Dharma speech — why don’t you bow to the Master?”

A few years ago, a Korean monk was drinking tea with some reporters. They were all seated around a low tea-table chatting pleasantly, “Oh, this tea is so fragrant — it’s really refreshing!”

Suddenly, the monk shouted “Katz!” and without warning flung the contents of his cup towards the reporters, effectively soaking them. The wet reporters were rather perplexed and asked, “Venerable, why did you just do that?”

Why did Zen Master Linchi slap the monk who had asked for teaching? Why did the monk who was calmly drinking tea suddenly fling it away? What do these incidents mean?

Let’s first look at the story of Zen Master Linchi slapping his disciple’s cheek. The young monk asked, “What is the Buddha-Dharma?” and at that moment Zen Master Linchi slapped him. The young monk didn’t have a chance to process what was happening, so for just an instant his thinking stopped — all discriminating thoughts of right and wrong were immediately cut off. Linchi was telling him to look directly at this primary point which is before any dualistic thoughts arise.

What is this primary point? It’s none other than the birthplace of mind — all feelings of elation, discontent, excitement and anguish arise from this point. This original substance is revealed when our thinking ceases, when the mind stops functioning. The young monk’s thinking completely stopped at the moment his cheek was slapped — his mind’s source was right there! A little while later, however, he began to feel dazed and confused, so his mind produced the thought, “Why did I get my cheek slapped?” along with those feelings of embarrassment and confusion.
Whichever state of mind arises is used completely — we use it for ourselves and while interacting with others; after some time, it disappears.

Similarly, all states of mind arise, serve their function, and then disappear. We can realize the nature of the mind by carefully observing this process of appearance and disappearance — when we clearly perceive the creator, we become our mind’s master. Something changes when we become the master — we are no longer pulled about by our own minds; we don’t need to suffer any longer, not knowing the true nature of our minds. The required state of mind simply appears as it is needed, serves its function, and then disappears — when one observes this process it is the study of mind.

Zen Master Linchi was showing the young monk the key point of this teaching when he slapped his cheek. His slap was a profound Dharma speech that both contained the principles of Buddha-Dharma and of cultivation itself — a Dharma speech with action not words.

The monk who flung his teacup at the reporters had the same intention. There’s nothing wrong with this kind of spontaneous action — we should actually be grateful for it. That’s why the older monk chastised the boy, “You’ve just heard a great Dharma speech — why don’t you bow to the Master?”