Koreans’ hours are long, but pay’s not so high

Koreans’ hours are long, but pay’s not so high 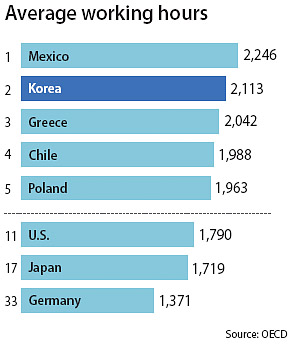 Koreans work the second longest hours of all OECD countries, and their incomes are lower than many nationalities that work less.

This was the second year in a row that Korea came in second place.

The only country with longer hours than Korea was Mexico, where a worker averaged 2,246 hours.

Average working hours for neighboring Japan, famed for long hours, was 1,719 hours, which is 18.6 percent lower than Korea. However, Japan’s hourly wage was $20.81, which is 32.8 percent higher than Korea’s.

The OECD data showed that Koreans work 49 days, or 2.2 months, more than Japanese, but earn 75% that Japanese workers earn in terms of hourly wages. This data is based on an eight-hour working day.

The gap gets bigger when Korea is compared to Germany. Koreans work 4.2 months longer than Germans, but only earn 73 percent of what Germans do.

Compared to the United States, Koreans worked 1.8 months longer but earned 56.4 percent of what Americans earn a year.

Netherlands came in second for working the shortest hours at 1,419 hours. Norway, Denmark and France were also in the top five.