Mirae Asset in talks to finance resort in Yeosu

Mirae Asset in talks to finance resort in Yeosu 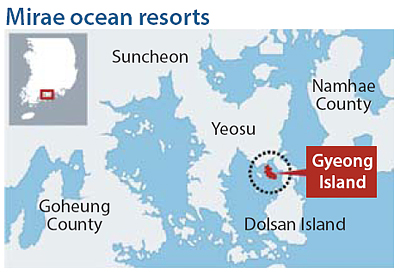 A consortium led by Mirae Asset Financial Group and U.K.-based investment firm Castlepines has been selected as a preferred bidder to build an ocean resort complex worth 1.1 trillion won ($998.4 million) on Gyeong Island in Yeosu, South Jeolla.

Mirae is the lead investor with a 70 percent stake while Castlepines holds a 30 percent share. The Korean financial firm continues to expand its real estate investments as it can ensure a steady cash stream with relatively high returns in an era of low interest rates.

The firm’s previous moves were property investments centered on landmarks and office buildings abroad. Mirae-owned properties are in Vietnam, China and the United States.

Chairman Park Hyeon-joo said that he saw the potential in the region as the ideal site for a luxury resort, backed by a growing number of tourists. A total of 13 million people both from other cities and foreign countries visited the city in 2015, up 31.3 percent over a year ago.

“Yeosu is endowed with better conditions for tourism than Singapore,” Park said in a meeting with Yeosu Mayor Joo Cheol-hyun Friday.

“I thought there is no reason to find other properties in Southeast Asia since we have Yeosu in Korea.”

If selected, Mirae plans to funnel 342.3 billion won to purchase the 2.1 million-square-meter (22.9-million square-foot) site and invest 750 billion won to construct a resort that would house a hotel, yacht club, marine cable cars and a water park. Jeonnam Development Corp., a state-run body, is scheduled to announce the investor by early September.

The ballooning size of Mirae’s alternative investments reflect the group’s appetite on the real estate market.

Mirae and its affiliates have purchased five offshore properties this year alone, taking the value of its property acquisitions to more than 2.5 trillion won. The combined figure for the first six months of this year accounts for half of all property investments made by the group since 2006.

The total amount of alternative investments managed by Mirae Asset Global Investments was 8.8 trillion won as of Aug.9, according to the Korea Financial Investment Association.