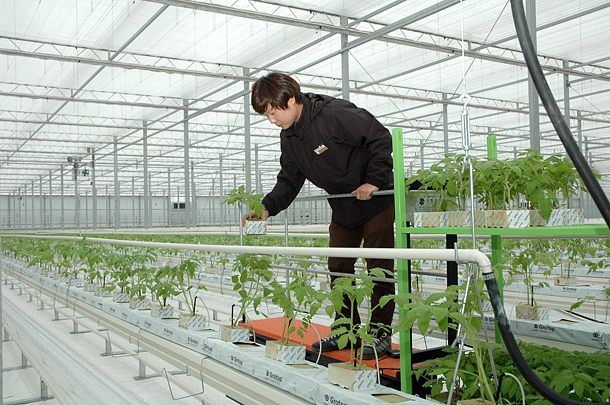 In the spring of 2013, I visited a greenhouse in Hwaong, a piece of reclaimed land in Hwaseong, Gyeonggi, operated by Dongbu Farm Hannong, a subsidiary of Dongbu Group at the time. It was more of a factory than a farm.

The greenhouse was over 100,000 square meters (25 acres). The sunlight, temperature and humidity were automatically controlled, and the nutrients were supplied through pipes. Production per unit area in the greenhouse was several times that of conventional farms.

While Dongbu promoted high-tech farming using the greenhouse, farmers’ organizations fiercely protested that conventional farming would suffer, and Dongbu gave up on the project. The farmers did not trust Dongbu’s promise that all the products grown at the greenhouse would be exported instead of sold domestically. Dongbu Farm Hannong suffered financial problems and was sold to LG.

This summer, LG and farmers’ groups have been in conflict over a project in Saemangeum, North Jeolla. LG CNS unveiled a plan to invest 380 billion won ($345 million) with foreign investors to build high-tech greenhouses and a research and development complex on a 762,000-square-meter plot of reclaimed land, a project called the “Smart Bio Park.” Farmers once again fiercely opposed the plan. The North Jeolla Provincial Assembly passed a resolution opposing LG’s entry into the farming industry. There are rumors that LG, discouraged by the opposition, may give up on the project.

Integrating farming with the latest technology is a global trend, an effort to enhance competitiveness. China and Australia promote large-scale smart farm complexes. In Japan, major corporations such as Sumitomo Mitsui and Toyota are involved in farming. Korea’s farming industry, though, is still unglamorous. The farming population is growing older, and farms are mostly small. Agriculture only makes up 2 percent of Korea’s GDP.

In order to save farming and nurture it as an industry of the future, the latest technology and major investment are necessary. It is not an easy task. Farming is not an industry where competitiveness is the priority. Dongbu failed to persuade farmers, and LG is likely to follow.

There is little trust between farmers and corporations. The price paid from the discord is significant. Dongbu invested 46.7 billion won on the greenhouse but had to sell it to a midsize company for 17 billion won. While the farmers obstructed the large enterprise from entering farming, they didn’t gain anything. The company that acquired the greenhouse is selling tomatoes in the domestic market during a “grace period for exports.”
It is exactly what farmers had been opposing. In April 2013, at the height of the discord between corporations and farmers, the government set up a committee to promote understanding and cooperation between farmers and businesses. What are the government and committee doing now? They seem to have meetings once in a while, but the committee website hasn’t been updated since June 2014.


*The author is the deputy national news editor of the JoongAng Ilbo.