As cigarette prices rise, so does smuggling

As cigarette prices rise, so does smuggling 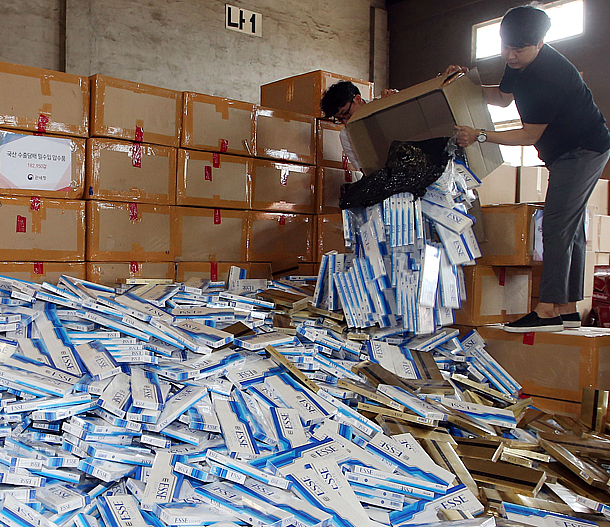 After the government raised cigarette prices from 2,500 won ($2.27) a pack to 4,500 won in January 2015, the number of tobacco products illegally distributed in Korea rose significantly.

The government caught 3.64 billion won worth of cigarettes smuggled into the country last year, the Korea Customs Service (KCS) said. The figure soared to 6.66 billion won this year through June.

“In the past, most of the illegally distributed cigarettes came from those given to sailors or workers at ports, but there are more smuggling cases reported after the price increase,” said an official at the customs service.

The government distributes duty-free cigarettes to sailors and foreign workers at dockyards at cheap prices since the workers often travel abroad. Since the amount of tobacco given to them was sizable, the workers profited by selling them to stores that illegally sell cigarettes.

However, cheating has become more sophisticated and systematic, including smuggling using shipping containers, since the price of cigarettes has gone up. Smuggling Korean cigarettes from overseas has risen since the government’s price hike.

In fact, the price of a pack of cigarettes only accounts for 26 percent of the retail price, or just 1,182 won. Another 54.5 percent of 4,500 won are taxes and the remaining government charges are used to promote health across the country.

Park Myung-jae, a lawmaker from the ruling Saenuri Party, said tax losses from illegally distributed or smuggled tobacco products are projected to reach to between 70 billion won and 210 billion won this year. “Tobacco consumption in Korea is around 3.75 billion packs a year and experts estimate that up to 1.7 percent of the total tobacco consumed here in Korea is illegally distributed,” he said.

Assuming the rate of illegally distributed tobacco products to be 0.6 percent, yearly losses from tax evasion reaches 74.6 billion won in 2016, and the amount rises to 186.4 billion won if 1.5 percent of merchants evade taxes.

On a recent visit to a small grocery store that sells foreign snacks and nutritional supplements in Namdaemun Market in Jung District, central Seoul, a store owner in her 50s was asked for cigarettes. She went to the other side of her store where boxes were stacked. Inside of the covered box, there were some 50 cartons of cigarettes. Outside of the box, “Made in Japan” and “Busan” were written in English. 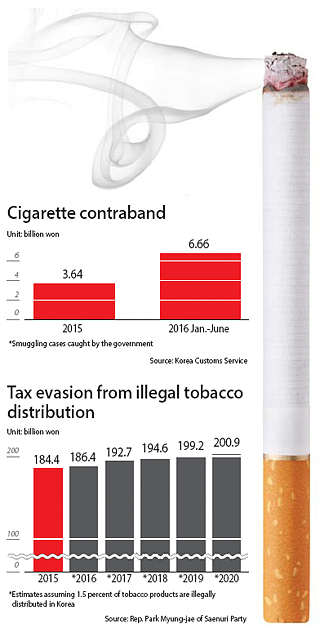 A reporter purchased a carton of Korean cigarettes for 34,000 won and another carton of a foreign brand for 37,000 won, some 25 percent cheaper compared to the retail prices around the country.

One tobacco company in Korea looked at those products and said they all were legitimate cigarettes and not fake ones, but noted that they are distributed illegally. In Korea, cigarette merchants must have licenses to sell and cannot sell for less than 4,500 won a pack.

Illegally distributed tobacco products are being sold at various places, including Namdaemun Market, Gukje Market in Busan, Yankee Market and Chinatown in Incheon. It is hard to find them through a web search, but stores’ locations and business hours are introduced in smokers’ communities on the internet. An industry insider said that the number of communities is growing as more smokers are seeking to buy tobacco at lower prices since the price hike.

Customs officials said they caught eight people who smuggled 1.41 million packs of cigarettes worth about 6.4 billion won last Tuesday. The smugglers didn’t report the cigarettes that were in the containers they were moving.

“We were surprised that such a method was actually used since we doubted this would ever happen when the government announced its plan to raise the price,” an official at the KCS said.

An industry insider, who has been dealing with illegally distributed tobacco for about 20 years, said the cheating methods are becoming more sophisticated.

“In the past, the only problems we faced were fake cigarettes made in China and peddlers who hid duty-free cigarettes they bought overseas in their suitcases to bring them into the country,” he said. “After the price hike, we are finding more numbers of large-scale smuggling cases.”

According to him, the custom declaration process for containers shipped overseas is completed a few days before the actual departure date. After the declaration, smugglers remove cigarettes that were supposed to be exported legally during the time between the declaration and departure. Such smugglers ship empty containers and distribute the tobacco across the country.

“These products head to various places that sell cigarettes illegally such as nightclubs and billiards,” an industry insider said. 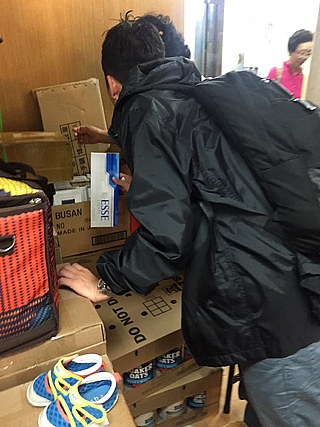 KCS recently caught smugglers using a similar cheating method. According to the customs service, a 53-year-old man surnamed Cho and four others bought 776,000 packs of exported Korean cigarettes in the Philippines at low prices from November 2014 to March of this year. They shipped them in a container to Korea, claiming the containers were carrying wooden chairs.

“There were no reasons for this type of crime to occur when the price was 2,500 won,” an industry insider said. “Smugglers didn’t have any reasons to do so by taking risks to make a small profit, but they are more willing to do so now since the price went up to 4,500 won.”

According to the KCS, only about 2.5 percent to 3.5 percent of containers entering Korea are inspected at the ports. Officials use X-ray machines as well, but the cost of the machines is a few billion won, which makes it hard for the government to operate the machinery on a large scale.

“We do understand that only a few containers go through inspections, but we do have a risk management system that focuses on containers or shippers that are more likely to commit such crimes,” said an official at the KCS. The agency labels certain countries in Southeast Asia as crime-ridden spots and implements tougher measures to catch them.

“It is very rare for smugglers to get actual imprisonment even after they are caught and we believe this is the reason why smuggling cases continue to go up,” an industry insider said. The KCS, on the other hand, said that smugglers face prison terms of up to five years and fines or tax levies as well.

“The bill needs to be passed as early as possible in order to reduce the tax evasion from the illegally distributed tobacco,” Park said.