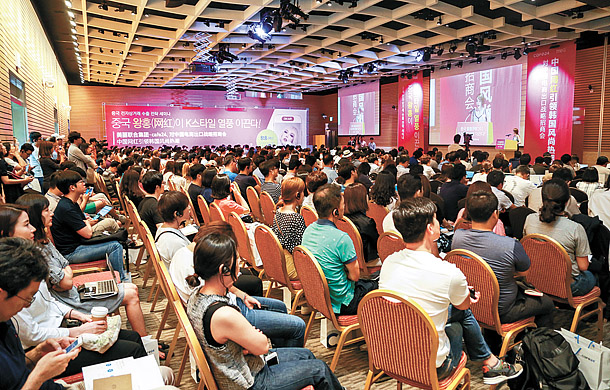 A crowd listens to a lecture on Korean fashion and business by Chinese blogger Min En, or also known by her pseudonym Wang Hong, at the Federation of Korean Industries in Yeouido, western Seoul. [CAFE 24]

Creativity and innovation have been two buzzwords of the Park Geun-hye administration ever since she took office in 2013, but even with the government’s drumming and promotion, taking on global innovators like Apple, Google, Amazon, Alibaba, Tesla and Xiaomi is easier said than done.

Nonetheless, small and meaningful changes are taking place as global investors are taking interest and investing in Korean companies.

Most of the ones receiving financial support from major global investors are considered to have strong potential for big profits, and while they may not be as large as traditional conglomerates, they are attracting investment through innovative products that capitalize on Korean pop culture.

“Korea is one of the top countries that young Chinese women want to visit,” said Min En, a famous Chinese blogger who operates under the pseudonym Wang Hong, during a lecture she gave at the Federation of Korean Industries in Yeouido, western Seoul, earlier this month. “It is the country where Chinese women’s favorite female protagonists on [Korean TV] dramas live, and it is where beautiful clothing and good cosmetics are.”

The Chinese blogger specializes in Korean beauty and fashion and has a huge following in her home country. She said many of her readers have been asking how they can purchase cosmetic products like lipstick that are difficult to find in China, so she began selling several hundreds of items there after finding distribution channels.

Among the investments made in Korea, K-beauty products stand out. On July 18, Goldman Sachs announced it had acquired Carver Korea, a Korean cosmetics company, with Bain Capital Private Equity for $35 million.

Carver Korea is best known for its brand AHC, also called the “Kim Hye-soo eye cream,” named after the famous actress who has been a model for the brand since 2015.

Although it is not a new industry, Korean companies have reinvented cosmetics as a high-value business by selling innovative products backed by the huge popularity of Korean culture in China.

According to London-based market research firm Euromonitor and Goldman Sachs, purchases of Korean cosmetic products by Chinese consumers, whether in Korea or elsewhere, was estimated to amount to $46 billion last year. This is expected to further expand to $68 billion by 2020.

Today, along with Korean TV dramas and reality shows, makeup artists working with Korean celebrities are spreading K-beauty in China. They have been entering the Chinese market with their own know-how and beauty tips.

According to the Korea International Trade Association, exports of Korean cosmetics grew 53.1 percent last year to $2.44 billion from the previous year’s $1.59 billion. More than half of the exports have been made to China, and exports of cosmetics sent to the country have surged 250 percent.

Innovation by Korean beauty product makers has largely contributed to this exceptional growth. In 2008, AmorePacific became the world’s first to develop a “cushion,” a cosmetic product that combines sun block, makeup base and foundation into a single unit, simplifying the process of applying makeup.

Korea today has one of the most diverse cosmetics industry in the world, with products that can satisfy the different needs of consumers.

Have & Be last year received an investment from the world’s second-largest cosmetics company, Estee Lauder.

“Chinese women used to only apply skin cleanser and lotion, but in Korea, women apply more than five or six as basic makeup including skin boosters, essence, eye cream, moisture cream and lifting cream,” the official said. “And with mask packs, there are different packs for varied purposes such as moisturizing, whitening, improving elasticity, easing troubled skin, brightening and contracting pores.”

The official added that such diverse products are changing the makeup skills of consumers in Southeast Asia and China. The latest trend in Korean cosmetics to make a splash worldwide is edible beauty products.

When adding the investment that the beauty start-up received last year, the total investment it was able to attract amounts to over 110 billion won. The company’s business model is developing cosmetics based on consumer data analysis. While Memebox is referred to as a cosmetics company, it is also an information technology company with 35 percent of its employees working as engineers, who use data from its three million-plus customers as well as information on 1,200 cosmetic products in their analysis.

“Globally, mobile, cosmetics and biopharmaceuticals are considered potential industries, which seems to be the main reason we have been successful in attracting investment,” said Ha “Dino” Hyung-seok, co-founder of Memebox.

Another area that is drawing global investors is online-to-offline businesses. Korea at the moment is not only the No. 1 country in terms of smartphone distribution, with 91 percent, but also has the fastest internet service, at 29 megabits per second.

Because of this environment, many global companies consider Korea as a test-bed. If a model succeeds in Korea, it might do well in other major cities like Tokyo, Beijing, New York and London.

“One of the biggest characteristics of innovative Korean companies is their convergence of existing industries with information technology,” said Christopher Jun, an executive director at Goldman Sachs.

Such is the case of e-commerce company Coupang.

Kim Bom, the founder and CEO of Coupang, said Korea has a better internet infrastructure than any other country, allowing the company to have faster delivery times than Amazon, even when throwing in additional functions.

“Because we have a highway, we are able to test our sports car,” Kim said.

“In the United States, there are similar online food delivery services,” a Goldman Sachs official said. “However, such services are only possible in major urban areas like Manhattan, whereas in other places, [consumers] prefer traditional takeout.”

The official said such delivery services have been successful in Korea because of the wide distribution of smartphones and heavily concentrated population in major cities like Seoul. In fact, 70 percent of the country’s 51.6 million people live in big cities.

Many countries in Asia including China have similarly dense urban areas, making the Korean business model one that can be applied across the continent.

Stephen Ko, managing director of American private equity firm KKR & Company, which invested in Korean e-commerce company Ticket Monster last year, said one of the distinctive changes today is that consumers are seeking convenience and value in spending as they shift toward mobile commerce.

And Korea is an attractive market that embodies such changes the most, he said.