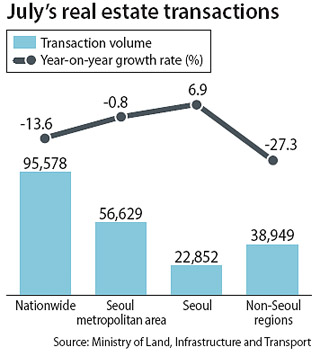 According to the Ministry of Land, Infrastructure and Transport Monday, the number of home transactions last month fell 13.6 percent year on year to 95,578 cases. However, the figure for July was 33.8 percent higher than the monthly average from 2011 to 2015, which was 71,000.

“Even though the transaction volume fell compared to the previous year, the figure rose compared to the average figure for the past five years since more people believed that housing prices will rise in the Seoul metropolitan area as many places in the region are expected to go in for redevelopment,” said Kim Ie-tak, a director at the Transport Ministry.

Transactions last month were the second highest for July since 2006, when the government started to compile the data in its current form. July transactions peaked last year at 110,675.

The figure dropped the most in Daegu and Ulsan, two big cities in southeastern Korea. In Daegu, transactions fell 51.6 percent year on year to 2,648, and in Ulsan 47.9 percent to 1,587.

Meanwhile, the number of a jeonse, or lump-sum deposit rental contract, and regular monthly rental transactions made last month recorded 110,211 last month, which is 10.1 percent lower than the previous year.