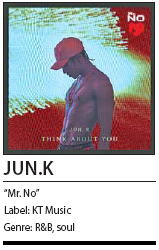 One should never judge a book by its cover, but perhaps this can be forgiven if the album cover of a new release features the artist topless with a well-carved six-pack.

Jun.K, the lead singer of six-member K-pop boy group 2PM, released his first solo effort last week, a mini-album with eight tracks, 12 years after making his musical debut with 2PM. In all honesty, it was Jun.K’s well-toned body on the cover that first got me to pick up the new release, but the songs, which the artist wrote and produced himself, are attractive enough by themselves.

Overall, Jun.K has maintained his musical style in his first solo release. The songs are similar in essence to his previous 2PM tracks, perhaps because Jun.K has written quite a bit for the group.

Some tracks in the new album are remakes of 2PM singles from a few years back while some are new, like the title track “Think About You.” The song is R&B in style but futuristic in feeling, giving listeners a refreshing experience. For the acoustic music fan, there is “My House,” a remake of the title track of the same name from 2PM’s fifth album. By Yim Seung-hye