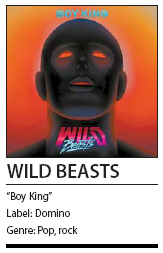 Wild Beasts live up to their name on the potent “Boy King,” 10 electric exposures of the English art rockers’ raw carnal desires.

Led by Haden Thorpe’s sometimes ghostly vocals and a barrage of synths and guitar riffs both glimmering and rusty, the band’s fifth album displays a variety of very male narratives about what must be modern love.

Most of the characters on “Boy King” seem burdened by stunted emotional growth, the intensity of feelings expressed in lines like, “You can stuff your chastity, your wait and see” (“He the Colossus”).

Explaining that “I will not hold you back... I’ll be right behind you,” even the apparently supportive partner behind the “Alpha Female” may be a scary stalker.

It’s only rock ‘n’ roll, but don’t come near my daughter.

After all the saber rattling, “Boy King” ends in a reflexive mood, supplanting testosterone with tenderizer. The man-as-boy-again in “Dreamliner” drops the hedonistic bluster and cries out “so be kind to me now.” Like everyone else, he just wants to be loved and would give his kingdom for a hug. AP