Clockwise from top left: Violin students rehearse with their mentor Kim Gue-rim, an undergraduate at Stanford University majoring in biology; two piano students share a piano to perform Beethoven’s Ninth Symphony; a student receives one-on-one lesson from a mentor; students have a go at learning unfamiliar musical instruments like the bassoon; Phillip Jung receives a lesson from his mentor, Grant Riew, a pre-med student from Harvard University, who became his role model. [LINDENBAUM FESTIVAL ACADEMY]

SEOGWIPO, Jeju Island - Against the backdrop of Jeju Island’s beautiful summer ocean, “Ode to Joy” from Beethoven’s Ninth Symphony was being played as the finale of a lunch concert inside a conference room of the KAL Hotel.

A ticket to this lunch concert, which included a buffet, was 60,000 won ($54). But during this finale, some parts were out of tune, and some string instruments squeaked from time to time.

However, the audience members didn’t seem to mind the dissonance coming from the orchestra. In fact, some of the audience said they had trouble fighting back tears - an understandable feeling when listening to such powerful and joyous music as “Ode to Joy.”

This is because the musicians who joined the orchestra for the finale performance were students who participated in the four-day Lindenbaum Festival Academy that kicked off on Aug. 6. 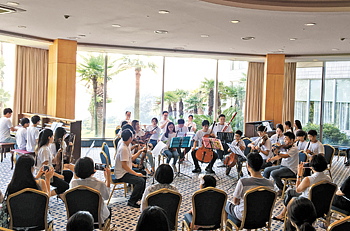 Students and teachers perform “Fantasy on Ode to Joy,” a rearranged version of Beethoven’s Ninth Symphony for the orchestra, as their finale after the four-day Lindenbaum Festival Academy. The festival was held at the KAL Hotel in Seogwipo, Jeju Island, this month. [YIM SEUNG-HYE]

The festival, which is in its first year, was organized by the Lindenbaum Music Company. Violinist Won Hyung-joon established the company in 2009. He was inspired by legendary conductor Daniel Barenboim, founder of the West-Eastern Divan Orchestra, which consists of musicians from Middle Eastern countries hoping to promote peace. In hopes to bring harmony between South and North Korea through music, Won has been holding numerous orchestra concerts and events such as the DMZ concert he held to mark the 70th anniversary of Korea’s independence from Japan.

After a series of failed attempts to hold a joint concert between the two Koreas for eight years, Won established a music academy to “convey young South Korean students Lindenbaum’s philosophy of bringing peace between conflicts through music and help students learn that communication and harmony starts from listening to each other, and being considerate of one another,” says Won. Receiving lessons on technical skills of musical instruction is also important, but Won says it’s only a collateral benefit students receive during the festival.

“Do you recognize this music?” Won asked the students during orientation on the first day of the festival.

He was showing them a video clip of a historic performance of an orchestra under the baton of legendary maestro Leonard Bernstein. The musicians were performing “Ode to Joy” on Christmas Day 1989, in the former East Berlin, to mark the fall of the Berlin Wall. Then, Won showed the students another video clip of the West-Eastern Divan Orchestra performing the same music under the baton of Barenboim.

“Beethoven’s Ninth Symphony was performed to celebrate this remarkable moment of the fall of the Berlin Wall. It was also performed harmoniously by the Palestine and Iraqi musicians who belong to the West-Eastern Divan Orchestra despite that they are at constant war,” said Won. “It sounds difficult, but we too are going to rehearse this meaningful piece of music for four days with your mentors and stage a performance.”

Despite Won’s passionate and desperate call for understanding, the 15 students who participated in the Lindenbaum Festival Academy, mostly elementary school students, responded with expressionless faces, as to wonder if the fall of the Berlin Wall, war in the Middle East, or even talking about bringing peace between the two Koreas through orchestra music, was relevant.

But after four days of Lindenbaum’s mentoring program, students demonstrated on the stage that they now understand, what communicating with other musicians means, why it is important to listen to others and how to be considerate.

The students went up on the stage with their mentors like their colleagues, and during their performance, they made constant eye contact and exchanged smiles and unspoken signs. Kang Seung-jin, 12, who was among two students playing the clarinet, even gave up playing few notes to point to the music score to help a friend next to him who got lost along the way.

“In order to make one voice and make harmony, I learned through the academy that we have to really listen to each other, help out when we are lost and go together,” said Kang, explaining that their mentor did the same for them during rehearsals.

“Usually, these students learn music through private lessons, from teachers who focus on upgrading their skills,” said Won. “But at the Lindenbaum Festival Academy, we invited musicians who can educate the students on humanism while teaching music.”

The 12 mentors who were invited to participate in the festival academy included professional musicians as well as non-professionals, who are currently college undergraduates majoring in music.

Won included college students as mentors because these “role models set an example and show them how to approach music,” he said.

“There are four undergraduate mentors who I’ve invited from the U.S. and they go to Harvard, Stanford and Wesleyan universities - the schools these kids want to go to, or at least their parents want them to go to,” said Won. “I’ve met them personally on my trip to the schools and I was really moved and inspired by their attitudes towards music and hearing about what they’ve learned through music. I wanted them to come to Korea and meet with the Korean students and inspire them as well.”

Two mentoring sessions were included during the four days, where undergraduate students talked to the kids about their love for music. “We want to talk to the kids about our experiences of seeing how music heals people and how it taught us to have courage, and have no fear of failure,” said Yang Na-young, a pre-med student at Harvard University, who is also majoring in violin.

“Na-young and I wanted to use our short summer break to meet these kids and just spend time together, and talk to them about why we are so passionate about music,” said Grant Riew, another pre-med student from Harvard who plays cello.

The festival academy also had sessions organized for the parents. Choi Young-hoon, senior editorial writer of Dong-A Ilbo, Han Young-yong, professor of Seoul Arts College and Robert Ogburn, Minister-Counselor for Public Affairs from the U.S. Embassy in Korea, each held sessions with parents to talk to them about education and raising children.

“We believe it is crucial in this modern society to strengthen education that builds young children’s character while discussing humanistic education with the parents,” said Park Sook-mi, senior adviser of the Lindenbaum Festival Academy. “And one of the best ways to do that, in our opinion, is through music education.”