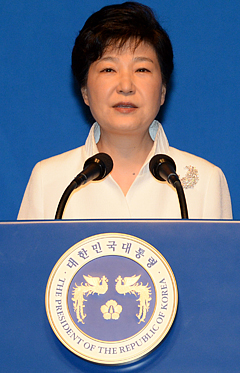 President Park Geun-hye defended her decision to deploy a U.S.-operated missile defense system in an address commemorating the 71st anniversary of Liberation Day on Monday, saying it would protect the Korean people.

Speaking before thousands, including ruling and opposition lawmakers and descendants of fighters against Japan’s 36-year colonial rule during the early 20th century, at the Sejong Center for the Performing Arts in Seoul, Park said the deployment of the Terminal High Altitude Area Defense (Thaad) system was a “measure of self-defense” against the North’s “reckless provocations.”

Park’s words were seen as a direct rebuke of Beijing, which strongly opposes a Thaad battery in South Korea and argues its capability far exceeds the needs of South Korea’s missile-defense.

“I believe that the matter [of Thaad] is related to the lives of the people and should not be a subject of partisan bickering,” said Park in her fourth Liberation Day speech as president.

To critics within Korea who say the deployment will harm relations with China, a vital economic partner that imported more than 25 percent of South Korea’s total exports last year, Park said, “If [critics] have any other alternatives to protect the nation and its people, then they must present it before us.”

Since Seoul and Washington announced they would import a Thaad battery last month, China has bristled, saying the system is designed for the U.S. to monitor its air space with its advanced radar system, an argument denied by the two allies.

On North Korea, Park urged it to put an “immediate halt” to its pursuit of weapons of mass destruction such as a nuclear arsenal.

“Any attempt to threaten the Republic of Korea and its people will not succeed. Making such an attempt will only aggravate its economic hardship and further isolate it from the international community.”

Park said South Korea would not avoid addressing the “dire status of North Korean people,” who she said were “suffering” because of “wrong decisions by the North Korean regime.”

In contrast with her previous Liberation Day speeches, Park did not propose overtures to Pyongyang or offers to hold inter-Korea events, such as reunions of families separated by the 1950-53 Korean War, reflecting the freeze in relations since the North’s fourth nuclear test in January and a long-range missile test the following month.

Last year, Park emphasized potential benefits from active inter-Korean cooperation such as creating a so-called World Eco-Peace Park in the demilitarized zone (DMZ) and reconnecting railways severed at the border.

Park renewed calls on the North to become part of the international community by abiding by international norms and reiterated her firm stance on preventing the North from becoming a nuclear-armed nation, saying she would not approve of the North’s nuclear program under any circumstances.

In another departure from previous Liberation Day speeches, Park did not address the issue of women sexually enslaved by the Imperial Japanese army during World War II, euphemistically referred to as comfort women.

Park’s skipping of the comfort women issue was seen as her willingness to get past the matter after the two neighbors reached a deal last December in which Tokyo apologized for the wartime atrocity and promised 1 billion yen ($9.8 million) in contributions taken from Japan’s state budget to fund a foundation to support Korean sexual slavery victims. Victims and civic groups oppose the deal, saying Japan still did not take legal responsibility for the atrocity and the Seoul government rushed to seal the deal without prior consultations with surviving victims.