Home of taekwondo battles for dominance in the sport

Home of taekwondo battles for dominance in the sport 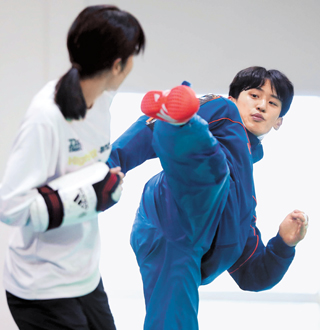 Lee Dae-hoon, right, during a training session on Monday in Rio de Janeiro, Brazil. Silver medalist from the 2012 London Games, Lee is a favorite to win the title in men’s 68-kilogram category at this year’s Olympics. [NEWSIS]

Can Korea live up to its reputation as the birthplace of taekwondo? While the country has lost its edge in the sport since it became an official medal event in the 2000 Sydney Olympics, expectations are high that the team at this year’s Games will bring back the old glory for Korea as they start their quest for gold at Carioca Arena 3 in Rio de Janeiro, Brazil.

Korea is in a desperate need for the five members of its taekwondo team to reel in some gold in their respective events, if it is to accomplish the 10-10. That is, finishing within the top 10 countries in medal tallies with more than 10 golds.

As of Tuesday Korea has captured six gold medals from this year’s Games, four of which came from archery after the team swept titles from the event. The problem, however, is that there remains only a handful of events at the ongoing Olympics in which Korea could bring in more gold medals.

What stunted Korea’s hunt for gold is the struggle that judokas had early in the Games. Judokas such as An Ba-ul and An Chang-rim were initially considered surefire shots for gold. Along with the two An’s, Korea had four athletes occupying the No. 1 position in the sport. The hype for the sport was therefore roughly as high as it was for archery.

Despite this, Korean judokas stepped off the mat with only one silver and one bronze in their hands, far worse than what was anticipated of them, which were at least two gold medals. The last time Korean judokas failed to win at least one gold was the 2000 Summer Olympics in Sydney, Australia.

Adding to the distress, Korean fencers such as Gu Bon-gil, Shin A-lam and Nam Hyun-hee, as well as the men and women’s teams, also came up short in their search for gold.

Park Sang-young, an underdog, added a gold in the men’s individual epee while Kim Jung-hwan brought home a bronze in the men’s individual sabre, but still, considering the performance in the 2012 London Games, in which they nabbed two golds, one silver and three bronze, the outcome from this year’s Games was rather disappointing.

Even in events such as badminton, where Korean players take up some of the top ranks in their respective fields, Korea has yet to grab any medal and the probability that they will is highly unlikely as favorites such as Lee Yong-dae and Yoo Yeon-seong duo, No. 1 in men’s doubles, have already been eliminated from the Games.

If it is to tally any more gold medals, Korea must now look to taekwondo and golf.

Korea has more members competing in taekwondo at this year’s Olympics than at any other past Games, with five currently in Rio getting ready to take on their opponents. In 2012, Korea had four athletes who added one gold and one silver from the event.

In women’s event, Kim So-hui and Oh Hye-ri will take on their opponents in 49-kilogram and 67-kilogram categories.

Fans now hope that the five practitioners will seize at least three gold medals, although this will be quite difficult since athletes from Mexico and Iran, who are also ranked near the top along with Koreans, will stand in Korea’s way.

Still, the team is more confident than ever on the eve of their bout.

“I’ve prepared a great deal and there’s nothing more I can do,” said Lee, who clinched silver in the 2012 London Games, as he landed at Galeao International Airport on Sunday, according to Yonhap News Agency. “I think it will come down to who will compete with more confidence.”

After failing to take gold in the men’s 58-kilogram category at the London Games, Lee moved up a weight class to the 68-kilogram division and this has relieved him of some of the stress needed to keep down his weight. Since London, Lee has won three gold medals in at the 2013 World Championships, the 2014 Asian Games and the 2014 Asian Championships.

Kim So-hui and Kim Tae-hun will mark the beginning of the team’s pursuit for medals at this year’s Summer Games at 7:00 p.m. tonight, Korea time, in the preliminaries of their respective events.