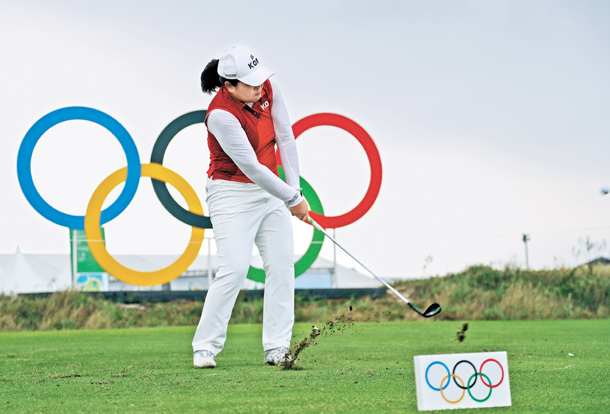 Park In-bee of Korea takes a shot during a practice round on Monday in Rio de Janeiro, Brazil. With four Korean golfers including Park attending this year’s Olympics, they will aim for a podium sweep. [AP/NEWSIS]

The men’s golf tournament at this year’s Summer Games concluded without any Koreans on the Olympic podium. The hunt for gold will now be handed over to Korea’s female golfers, some of the best in the world, who will aim for a podium sweep in Rio, where golf has returned as an official medal event for the first time in over a century.

Park In-bee, Kim Sei-young, Chun In-gee and Amy Yang - these are the names that make up Team Korea’s female golf team, the only team out of 34 countries that has four players on its roster, and the team is as solid as they come.

According to Olympic regulations for golf, the top 15 players in rankings as of July 11 may qualify for the Olympics with a limit of four golfers per country. Park, Kim, Yang and Chun were ranked No. 3, No. 5, No. 6 and No. 8 by the Rolex Rankings. Other than Korea, the United States is the only team with more than two players on its roster - it has three.

While all four are favorites to take the podium, their head coach Pak Se-ri is optimistic, even confident perhaps, about the possibility of a podium sweep.

“Our goal is to take all three medals for ourselves,” said Pak.

Her confidence is not unwarranted. Combining their career wins, the four players have accumulated a total of 25 LPGA trophies together.

Head coach Pak, an LPGA Hall of Famer, competed alongside her players until recently, so she knows the ins and outs of the play styles of the four golfers.

“Kim is definitely on an upward trajectory,” Pak said. “You can always count on Yang to be steady on the field. Park is the most experienced of all and Chun is the most adaptive when it comes down to playing in an unfamiliar course. I saw the men’s tournament earlier and found out this course has so many variables, so it is difficult to pinpoint who will do best.”

The coach added, “They are feeling the pressure to capture a medal. My role is to help them approach this tournament more relaxed.”

Park, another LPGA Hall of Famer, has been struggling with incessant injuries throughout the season, the latest being her thumb injury. “My shots are getting better,” Park said. “My thumb feels better, as well. I don’t really want to think too much about my injury anymore.”

Indeed, her practice rounds indicate that Park is more than ready for a shot at the podium. During the practice round on Monday, Park recorded a rare hole-in-one at the par-3 sixth hole of the Olympic golf course in the Marapendi Natural Reserve in the Barra da Tijuca zone of Rio de Janeiro, Brazil. This is the first hole-in-one in two years for Park. The last one came in July 2014.

“I think this may be a good sign,” she said.

After achieving an LPGA career grand slam, an honor given to a golfer who has won four different majors in her career, she will achieve an unprecedented feat if she takes gold for herself at this year’s Games as she will become the only golfer in history to take titles from four different major events as well as the Olympics.

“I don’t want to leave with any regrets,” said Park. “I am honored to represent my country and now that I have done everything I could to prepare myself for the Olympics, I would be happy to see a good result.”

But anybody who thinks Korean golfers have a guaranteed ticket to the podium may be in for a rude awakening, as they still will have to face New Zealand’s Lydia Ko and Thailand’s Ariya Jutanugarn, just to name a few.

Ko, the irrefutable No. 1 in the world right now, is the most dominant player today in women’s professional golf. Ko turned pro in 2013 at the age of 17 and has won 14 LPGA titles throughout her career. The 19-year-old golfer already has two major championship trophies on her shelf.

Adding more competition for the Koreans, Thailand’s Jutanugarn is a fierce up-and-comer. Since the season began, she has claimed four titles, putting a stop to the domination of Korean golfers, or those with Korean heritage, at this year’s LPGA. Jutanugarn is currently ranked No. 2 after Ko.