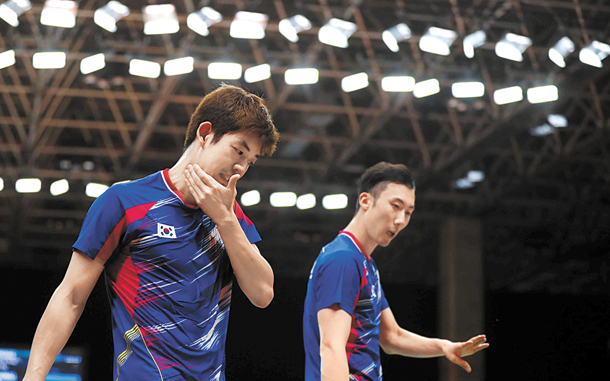 The top ranked badminton duo Lee Yong-dae and Yoo Yeon-seong suffered a 2-1 (17-21, 21-18, 21-19) loss in the quarterfinals of the men’s doubles at Rio de Janeiro on Monday, failing to advance to the semis. Another Korean men’s doubles team, Kim Sa-rang and Kim Gi-jung, was also eliminated from the quarters earlier in the day. Elsewhere in Rio, in table tennis, Korea could not overcome the Great Wall of China as it succumbed to the Chinese team in the men’s team semifinals.

Lee and Yoo, who are ranked No. 1 in men’s doubles, were eliminated from the quarters on Monday in a shocking turn of events.

During the early knockout match on Monday at Riocentro-Pavilion 4, the Korean duo was stunned by the Malaysian pair Goh V Shem and Tan Wee Kiong, who are ranked No. 12.

The Korean duo had a decent start, taking down the Malaysians 21-17 in the opening frame, but the Koreans began sliding in the second set when Goh started to spray smashes. The Koreans tried to retaliate, but their efforts came up short and the set was concluded 18-21 with the Malaysians evening out the set score to 1-1. The third set wasn’t so different from the second. The two teams struggled, taking the lead and giving it back repeatedly. But once the score reached 10-14, Lee and Yoo could not recapture the lead and eventually became victims of yet another upset at this year’s Olympics.

Lee and Yoo could not hide their disappointment after the loss. “I cannot be more disappointed,” Yoo said, unable to control his emotions. “We thought about different ways to overcome the pressure. Only if I could have supported [Lee] better…”

Along with Lee and Yoo, Kim Gi-jung and Kim Sa-rang, No. 3 in the world, were also knocked out after they lost to China’s Fu Haifeng and Zhang Nan. 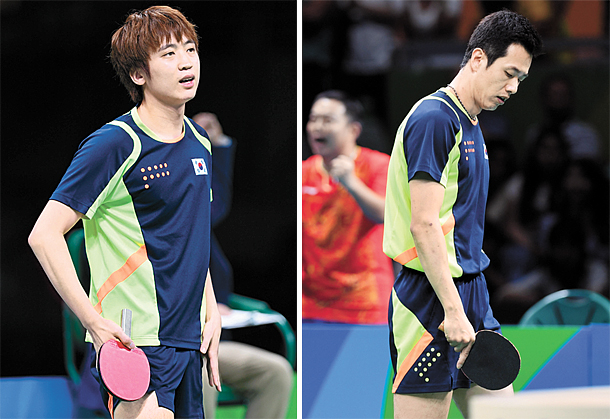 The pattern of Chinese forcing Koreans to pack their bags and go home did not end there. In the men’s table tennis semis, China defeated Korea 3-0, leaving no chance for the Korean side to avenge their loss during the finals at the 2012 London Games where China took down Korea 3-0, as well.

Joo Sae-hyuk, Lee Sang-su and Jeoung Young-sik went head-to-head with China’s Ma Long, Xu Xin and Zhang Jike, who are ranked No. 1, 3 and 4 in the world. From the get-go, odds were against the Koreans although they were determined to not let this get the best of them.

In the first singles match between Jeoung and Zhang, the 24-year-old Korean who is ranked No. 12 worldwide forced Zhang to the edge and took a win from the opening frame. Zhang, who captured silver in the men’s singles early in the Games, quickly regained his pace and took the second set for himself. The Koreans then pushed Zhang again to the limit by taking the third set. But Jeoung’s feeble attempt for an upset soon crumbled as Zhang took the fourth and fifth sets by 11-8 and 11-4. Joo, the eldest of the team, had no chance against this year’s gold medalist from singles event Ma as the match was concluded in less than 20 minutes by 3-0.

In doubles, although Lee and Jeoung came close to finishing each frame with a win, they could not hold it together and lost all three sets to Zhang and Xu.

The Korean trio will contend for bronze against Germany at 11:00 p.m. tonight, Korea time.